Live Results, Winner Interviews And More From UFC Fight Night: Błachowicz vs Rakić, Live From The UFC APEX In Las Vegas
By Thomas Gerbasi, on Twitter @TGerbasi • May. 13, 2022

The highly-anticipated UFC Fight Night main event between former champion Jan Błachowicz and No.3-ranked Aleksandar Rakić was entertaining for as long as it lasted, but after two fast-paced rounds, a knee injury suffered by Rakić rendered the Austria native unable to continue, with the third-round TKO win going to Błachowicz, who now hopes to face the winner of the UFC 275 main event between Glover Teixeira and Jiří Procházka.

Who Won Bonuses At UFC Vegas 54?

It was an abbreviated ending to an entertaining fight, but former light heavyweight champion Jan Błachowicz got the win in the UFC Fight Night main event, as Aleksandar Rakić was unable to continue due to injury in the third round.

Both were throwing hard from the start, with punches upstairs and kicks down. Rakić drew first blood, cutting Błachowicz around the left eye, but the former champion’s kicks to the calf were not being checked. As the round progressed, it was clear that neither fighter was interested in going five rounds, and it was Błachowicz stunning Rakić briefly with a little over two minutes left. And a left hook from the Poland native drilled Rakić with 50 seconds to go.

After eating more shots to begin round two, Rakić took the fight to the mat, and Błachowicz quickly looked for a triangle choke. Rakić pulled free and settled into his foe’s guard, where he stayed, working effectively, for a long spell. Błachowicz tried to break free, but Rakić kept him grounded against the fence until the end of the round.

The two battled on their feet as round three began, but suddenly, Rakić fell to the canvas, grabbing his right knee after planting it, and that was it for the fight, with referee Mark Smith waving it off at 1:11 of the third round.

Co-Main Event: Ryan Spann defeats Ion Cutelaba via submission (guillotine choke) at 2:22 of the first round

As expected, it was a wild one between light heavyweights Ryan Spann and Ion Cutelaba for as long as it lasted, but Spann put an end to matters early, submitting “The Hulk” in the first round.

Cutelaba ate a couple hard shots as the bout commenced, but that didn’t stop his aggressive start. A right hand did jar him briefly, forcing him to seek - and get - a takedown a minute in. Spann got up quickly but was sent back to the mat almost immediately. Again, the pattern repeated, but this time, Spann locked in a guillotine choke, forcing a tap out at 2:22 of round one.

Davey Grant defeats Louis Smolka via KO at :49 of round three

Davey Grant went to war again in his bantamweight bout against Louis Smolka, and it was the Brit picking up the win once more, as he halted Smolka in the third round.

Grant’s kicks were on target from the start, and he soon added punches to the mix, catching Smolka several times. Smolka took the blows well, but there was little offense coming back at the Brit, who was landing harder and harder shots. With 40 seconds left, a stiff jab put Smolka on the seat of his pants, and while he tried to work his ground game while there, Grant wasn’t having it, and the two were back on their feet by the end of the round.

Smolka went for the takedown to start round two, but Grant defended well and kept swinging haymakers. Smolka got a couple shots in between, and while Grant’s attack remained relentless, the exchanges were starting to turn in the Hawaiian’s direction. With a minute left, the fight went to the mat, and Smolka locked up Grant’s arm briefly. A wild scramble ensued, with both slugging it out to the horn.

Grant’s calf kicks forced Smolka into a desperation takedown attempt early in round three, but Grant defended it and then unleashed several strikes that ended the fight, with referee Mike Beltran stepping in at :49 of the final round.

Number one flyweight contender Katlyn Chookagian held off a strong effort from Amanda Ribas before emerging victorious via split decision.

Ribas aggressively closed the distance on the taller Chookagian, and once within range, she threw her foe to the mat and kept her there until the two rose with 1:45 left. Chookagian picked up the pace once standing, and she landed some solid shots to finish the round strong.

The pace stayed high in the second, Ribas pressuring Chookagian, who picked at her opponent from long range with a variety of strikes before Ribas scored with another throw two minutes in. With 90 seconds to go, Chookagian rose and was able to break free, and again, it was the “Blonde Fighter” surging down the stretch.

Keeping the fight standing for the first four minutes of the final round, Chookagian appeared to be in total control of the fight, but a late takedown and some flurries down the stretch brought Ribas back into it, leaving the judges with a tough call to make. | Official Scorecards

Manuel Torres defeats Frank Camacho via TKO (strikes) at 3:27 of round one

Dana White’s Contender Series graduate Manuel Torres impressed in his Octagon debut, as he stopped veteran Frank Camacho in the first round of a wild lightweight shootout.

Both fighters got down to business immediately, throwing and landing bombs for the first minute until moving into a clinch briefly. Once separated, the exchanges continued, both getting in their shots, but Torres surged ahead after landing a flush right uppercut, and moments later, a left-right dropped Camacho to the mat, and referee Herb Dean had seen enough, calling a halt to the fight at 3:27 of the opening round.

Hadley’s strikes were coming fast and hard to open the bout, but Nascimento calmly tripped his foe to the mat and the pair then began battling it out there. Nascimento looked to lock up his foe’s leg, then swept his way into the top position, where he remained for most of the opening round.

Nascimento began the second stanza with another takedown, and while Hadley tried to stay busy from his back, the judges likely scored it for the Brazilian, who maintained control from the top position until late in the frame.

Hadley went on the attack to begin round three and he went chasing a choke before putting Nascimento on his back. Nascimento defended well and took control back and the two soon returned to their feet, but only briefly, as the pair continued to go back and forth on the mat until the final horn. | Official Scorecards

Viviane Araújo dodged some trouble early in her bout with fellow flyweight contender Andrea Lee before roaring back to take a unanimous decision victory. 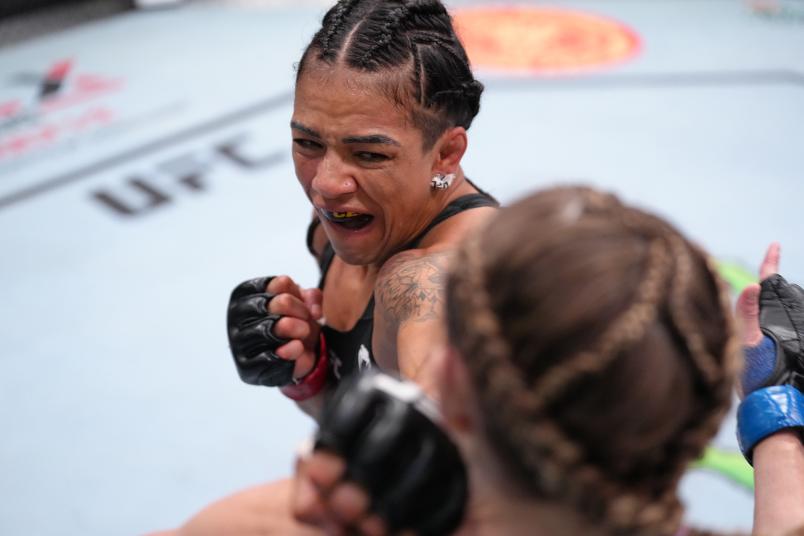 Viviane Araújo of Brazil punches Andrea Lee during their flyweight fight inside the UFC APEX at UFC Fight Night: Blachowicz vs Rakic on May 14, 2022 in Las Vegas, Nevada. (Photo by Jeff Bottari/Zuffa LLC)

Seconds into the fight, a short left hand by Lee dropped Araújo, and a right head kick followed as the Brazilian tried to rise. Araújo was then taken down, but she recovered and then slammed Lee to the mat as they got back to their feet. The 125-pounders rose again and traded punches before an Araújo clinch put Lee, whose nose was bloodied, against the fence. After separating, Araújo continued to play the aggressor, and she used her strikes to set up another takedown.

Araújo got the fight back to the mat early in round two, nearly flattening Lee out and then almost locking up an arm triangle choke, and while the Brazilian didn’t get the finish, it was a dominant frame for “Vivi,” who kept her momentum going through the third and final round, turning a rough start to the fight into an impressive victory. | Official Scorecards

Michael Johnson defeats Alan Patrick via KO at 3:22 of round two

Lightweight veteran Michael Johnson earned his first victory since October 2018 in spectacular style, knocking out Alan Patrick in the second round.

Johnson got off to a strong start on the feet, but 90 seconds in, a left hand by Patrick wobbled him. After a brief clinch, Johnson got his legs back under him, but a spinning backfist jarred the St. Louis native again, prompting a takedown with a little over a minute left.

Patrick kept it wild in the second, but Johnson stuck to his clean technique, and a four-punch combination capped off with a left hand dropped the Brazilian hard to the mat. Two right hands followed on the grounded Patrick, bringing in referee Herb Dean to stop the fight at 3:22 of round two.

Jandiroba nearly ended matters early as she worked on Hill’s leg as they battled on the ground, but Hill stayed cool, found daylight and made it back to her feet. She even turned the tables on her foe with a late takedown of Jandiroba.

Hill was smooth with her striking for the first half of round two, but Jandiroba opened the second half of the stanza with a takedown, and soon she had locked Hill’s arm up. Hill defended well and made it out of the round, but Jandiroba had a solid lead heading into the third.

Hill came out fast for the third behind her standup game, but she was soon back on the canvas, and the fight stayed there until the horn, securing the victory for Brazil’s Jandiroba. | Official Scorecards

Taira had a solid, workmanlike first round, but Candelario, who was competitive throughout, ended it on top with a last minute takedown.

The Japanese prospect dropped Candelario in the opening minute of round two, and after some follow-up strikes, he took his foe’s back and more strikes followed. Candelario hung tough and made it out of the round, but he had a large hole to dig himself out of in the final frame.

Candelario opened the third with a takedown, and as Taira tried to rise, the New Englander went for a guillotine choke. Taira escaped and got locked up again, but his second escape saw him take control with a triangle choke that he used to take Candelario’s back. Candelario got loose, but Taira finished the round and the fight strong with a barrage of ground strikes. | Official Scorecards

Andre Petroski defeats Nick Maximov via submission (anaconda choke) at 1:16 of the first round

The biggest underdog on the card, Andre Petroski, defied the odds in impressive style in the middleweight opener, submitting Nick Maximov early in the first round.

Petroski denied Maximov on an early takedown attempt, and that defense turned into a front headlock and then the anaconda choke that ended matters at 1:16 of the opening frame.

Petroski moves to 8-2 with the win. Maximov falls to 8-1. | Official Scorecards