The Legacy Of José Aldo

With The News Of His Retirement From MMA, We Take A Look Back At José Aldo's Amazing Career.
By Thomas Gerbasi, on Twitter: @TGerbasi • Sep. 19, 2022

Opponents of José Aldo will never forget his thudding kicks to the leg, his sharp punches to the face, or his unyielding will to win. That’s why “The King of Rio” retired from the sport yesterday as the best featherweight of all-time and an icon in his home country of Brazil.

We got glimpses of Aldo unleashing that ear-to-ear grin at various times over the years, and when he did, it lit up the room. You can see it in the photo he shared with his longtime teammate Renan Barao when the two visited New York City before their title fights headlined UFC 169 in Newark, New Jersey’s Prudential Center in 2014.

The pair of Nova Uniao standouts had reason to be happy. Not only were they the stars of the show, but they made it. Through all the tough times, through all the hard fights, long flights and moments when they had to question whether they would ever get to the top of the MMA mountain.

I remember Aldo telling me about such moments before his June 2008 fight against Alexandre Nogueira. He was debuting in the WEC, a 10-1 prospect who was well-known by hardcore fight fans, but an unknown to most of those who showed up to Sacramento’s Arco Arena for a megafight between future foe Urijah Faber and former UFC champ Jens Pulver. He was the second bout on the card that night, but he was happy to be anywhere that would help move his career further. 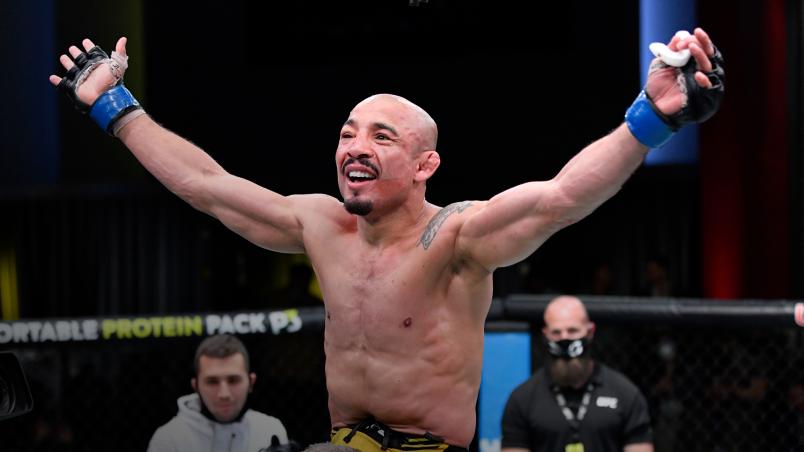 Jose Aldo of Brazil reacts after his victory over Rob Font in their bantamweight fight during the UFC Fight Night event at UFC APEX on December 04, 2021 in Las Vegas, Nevada. (Photo by Jeff Bottari/Zuffa LLC)

“It was hard times,” he said. Aldo had already left everything behind in his native Manaus to train with Andre Pederneiras and Nova Uniao in Rio de Janeiro. The Nogueira fight was the 21-year-old’s ticket, as there was no 145-pound weight class in the UFC at the time. Win this, and the future would look a lot different than it did before. Losing was not an option.

“I needed to get where I am now and wanted it more than anyone,” said Aldo, who stopped his countryman in the second round and proceeded to jump on the top of the WEC’s cage in celebration. He then did a backflip off the cage. There was a slight grin, but no smile. Not yet. There was still work to be done, and he did it, better than anyone had at 145 pounds.

After three more WEC knockouts, he squared off with Cub Swanson in June 2009, ending the bout in eight seconds, no typo.

Five months later, he was the WEC featherweight champion, taking the belt from Mike Brown, and then came a punishing five-round victory over Faber in the biggest fight in WEC history. A final title defense over Manny Gamburyan followed before he was named the first featherweight champion in UFC history as the promotion brought in WEC fighters and launched the 145- and 135-pound divisions.

Aldo had arrived, and by the time he made it to New York City for the aformentioned press gathering, he had successfully defended his crown five times, beating Mark Hominick, Kenny Florian, Chad Mendes, Frankie Edgar and Chan Sung Jung.

His skills were obviously elite, but it was his mindset that kept him on top.

“I keep dreaming like them,” he told me before the Lamas fight when asked how he fought like a hungry challenger instead of a secure (and perhaps complacent) champion night in and night out. 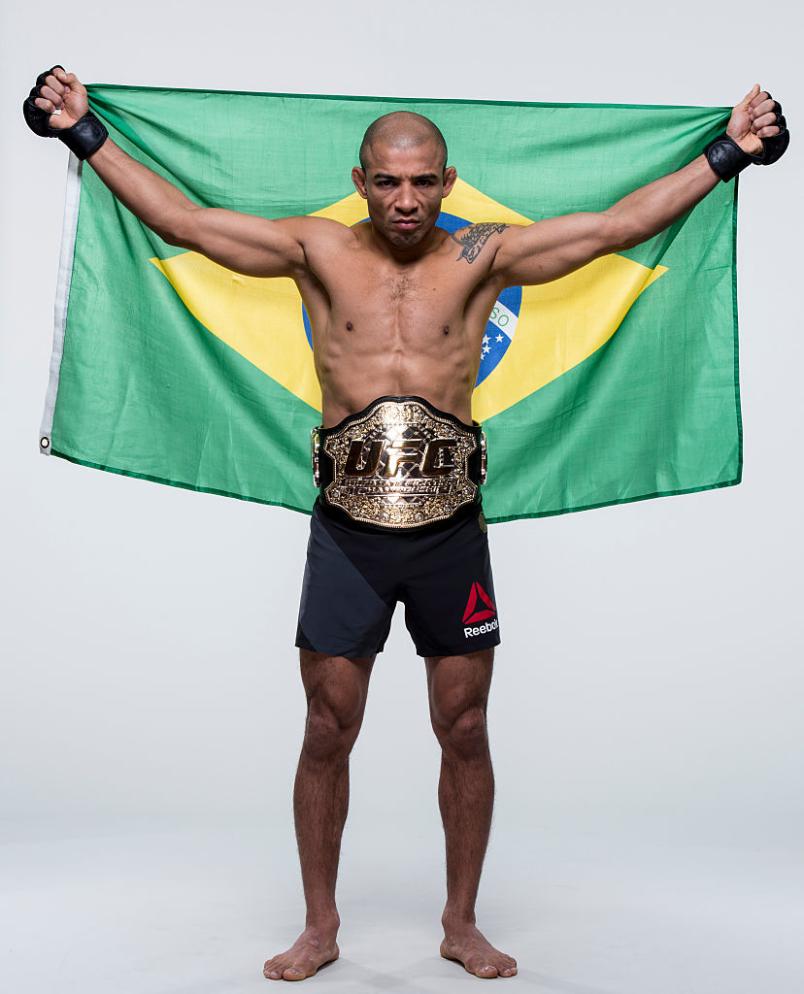 The dream never died for Aldo. He would lose his title to Conor McGregor in a 2015 fight that captivated fans in and out of the sport, but while such a bitter defeat could cause anyone to take their foot off the gas or lose their love of the game, Aldo regained his title, then bounced back from painful defeats to leave fans with a lasting impression of his greatness during a three-fight run at bantamweight that saw him defeat Marlon Vera, Pedro Munhoz and Rob Font in succession. He wasn’t the same fighter in his mid-thirties as he was when he was 21, but in his mind he was, and that hunger never faded. He adjusted his tactics and rounded out his skill set as Father Time came knocking, and as he relied on grit and his Fight IQ, he showed that he was a one of a kind athlete, the likes of which we won’t see again anytime soon.

“When you leave your family and friends and everybody behind and you start to look to do something to build your dream, it’s really a shot in the dark,” said Aldo when I spoke to him and Barao that afternoon in the Big Apple. “So we always thought about that. We wanted to improve our lives somehow and help our family and our parents, and that’s not only my dream, but the dream of Renan and everybody else that’s in the game.”

José Aldo lived the dream. Now he can smile about it a lot more.