The Undisputed UFC Featherweight Champion Alexander Volkanovski Plans His Next Move After Defeating The Korean Zombie At UFC 273.
By James Cooney, on Twitter at @JimCooney • Apr. 19, 2022

Australia’s Alex Volkanovski is in a good mood. The 33-year-old UFC featherweight champion hasn’t lost an MMA bout in nine years, and just successfully defended his UFC belt for a third time – in convincing fashion – against “The Korean Zombie” Chan Sung Jung at UFC 273.

“Things are great,” he smiles. “I’m doing a bit of a victory tour around the U.S.”

Things are good back at home, too, where the champ’s local pub recently renamed itself The Volkanovski in his honor. There’s also a lot of talk about where Volk ranks in the list of pound-for-pound best fighters and how long it’ll be before he makes it into the Hall of Fame.

Yep, you could say he’s got a few reasons to smile.

Heading To Singapore? Get Your Tickets For UFC 275: Teixeira vs Prochazka

“Everything went according to plan against Zombie,” recalls the reigning 145-pound king. “That’s exactly what I expected – I said it all week. I’m glad he’s OK now. I think whoever was in front of me in the Octagon [at UFC 273] was in for a very long night. I’m just on a whole other level right now.”

Volkanovski’s masterclass against versatile veteran Jung was arguably his most impressive performance in the UFC to date. Not only did it cement “The Great” as the top featherweight on the planet, it left many wondering whether it might be time for him to move up a division.

“I’m going to keep raising that bar,” promises the Aussie. “As soon as I can, I’ll be back in the gym, improving. I seem to be understanding the game a lot better than I was before, both mentally and physically. My confidence is so much higher – I’m just capitalizing on what I see in front of me with no hesitation.”

When the P4P discussion is mentioned, he’s diplomatic, while viewing it as another challenge to be overcome.

“It’s not for me to decide. I’m on a 21-fight win streak… If people are going to throw my name out there, it’s probably deserved. But for those others who don’t think I’m there yet, I will be soon!” 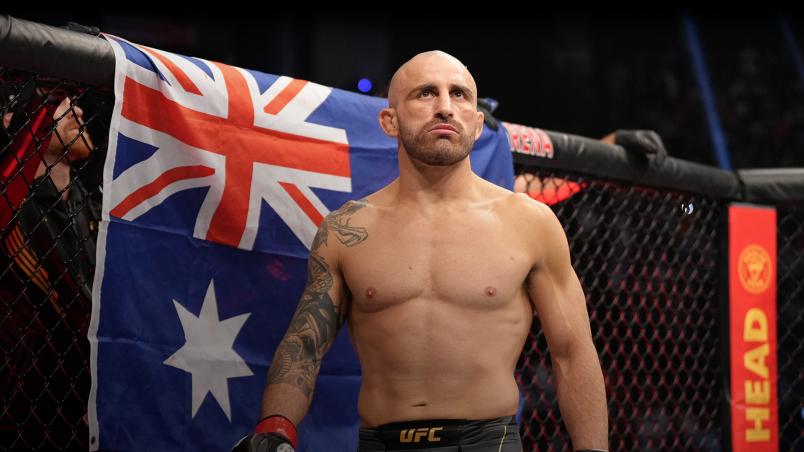 “I’m still in love with MMA. And I’m understanding so much more now. The way I’m taking on knowledge is really exciting. I seem to be learning more about myself, too. So, I’m really enjoying everything about my training and the sport. I feel like I’m at the top of my game – it’s a good position to be in.”

It sure is. And being the type of person he is, Volkanovski doesn’t plan to rest on his laurels for long. The phenom from Down Under knows that, as in life, it’s not enough to keep improving your skills, you need to put them into action.

“I’m happy to get back in the Octagon around August. And the next time you see me, I’ll be even better!”