The Best Of Mackenzie Dern

Currently the No. 5 ranked contender in the women’s strawweight division, Mackenzie Dern has become one of the sport’s brightest rising stars.

A prolific grappler, Dern has earned seven of her 12 wins by submission, four inside the UFC. On October 1, Dern will test herself against Xiaonan Yan in her second UFC main event, at UFC Fight Night: Dern vs Yan, live from the UFC APEX.

As we approach fight night, relive some of the memorable moments from Dern’s UFC career on UFC FIGHT PASS: 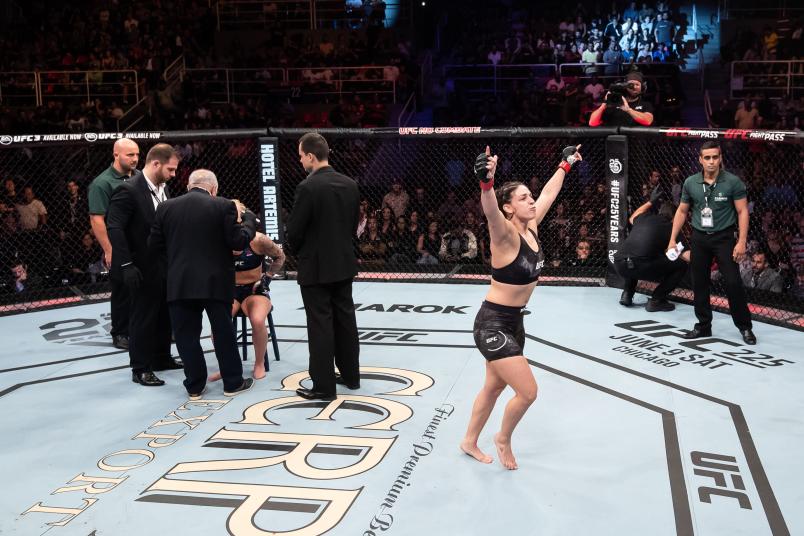 Mackenzie Dern celebrates victory over Amanda Cooper in their women's strawweight bout during the UFC 224 event at Jeunesse Arena on May 12, 2018 in Rio de Janeiro, Brazil. (Photo by Buda Mendes/Zuffa LLC/Zuffa LLC)

In her second Octagon appearance, Dern started the bout similar to her debut, focusing mostly on her striking despite having an elite grappling pedigree. Landing some looping punches early, there still wasn’t too much worry for Cooper, who was the cleaner striker through two minutes.

Dern continued to strike, however, and flipped the script with a big right that sat Cooper down. Dern took advantage of the knockdown and got top position on the mat, hammering away with ground-and-pound strikes until Cooper gave up her back.

If you hadn’t watched tape on Dern before this bout, you may think you have an opportunity to break away once Dern has your back. But two rear naked choke finishes prior to her arrival in the UFC would say differently. Dern quickly locked in the RNC, forcing the tap from her opponent.

Not only was this Dern’s first finish inside the Octagon, but a statement that she has both power on the feet and an elite grappling game that no fighter wants to try and challenge. 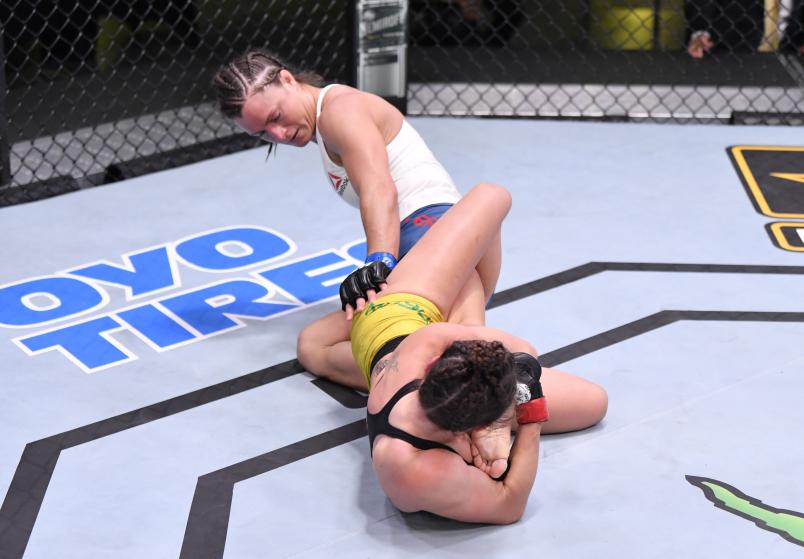 Mackenzie Dern secures a knee bar submission against Hannah Cifers in their strawweight fight during the UFC Fight Night event at UFC APEX on May 30, 2020 in Las Vegas, Nevada. (Photo by Jeff Bottari/Zuffa LLC)

Coming off a unanimous decision loss against Amanda Ribas, Dern wasted no time bringing the action to the few fans in attendance at the UFC APEX when she faced Hannah Cifers. Clinching only 20 seconds into the first round, Cifers landed numerous knees and elbows, making Dern question whether clinching or attempting takedowns was a smart move going forward.

But after landing some effective strikes from distance, Dern secured a takedown shortly after Cifers initiated the clinch. Trying to land strikes from top position, Dern grabbed a hold of Cifers’ leg and locked in a knee bar.

This secured her second first-round submission win in four UFC fights and showed the improvements she made in both her standup and takedown ability.

No Limbs Are Safe 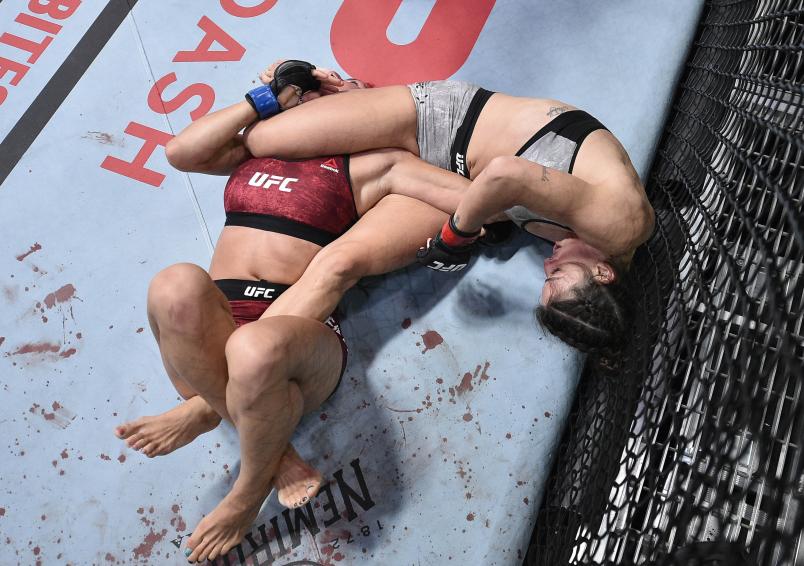 In one of her most dominant performances to date, Dern dictated nearly every facet of her bout against Randa Markos. Dern unloaded on a body kick early that only grazed Markos, causing Dern to fall to the mat, where she’s more than happy to be.

Markos mistakenly chose to initiate with Dern on the mat, but as soon as she did, Dern grabbed hold of Markos’ arm and starting threatening submissions. Moving from one position to the next effortlessly, Dern was a step ahead of every grappling exchange. Threatening armbars to triangles to eventually being in mount, Dern’s jiu-jitsu looked unstoppable.

Eventually threatening the final submission attempt of the night, Dern had full control of an armbar but couldn’t secure the perfect angle to finish the fight. After softening Markos up with heavy shots to the head and body, Dern eventually sunk in the armbar, forcing a tap for the third time in her UFC career. 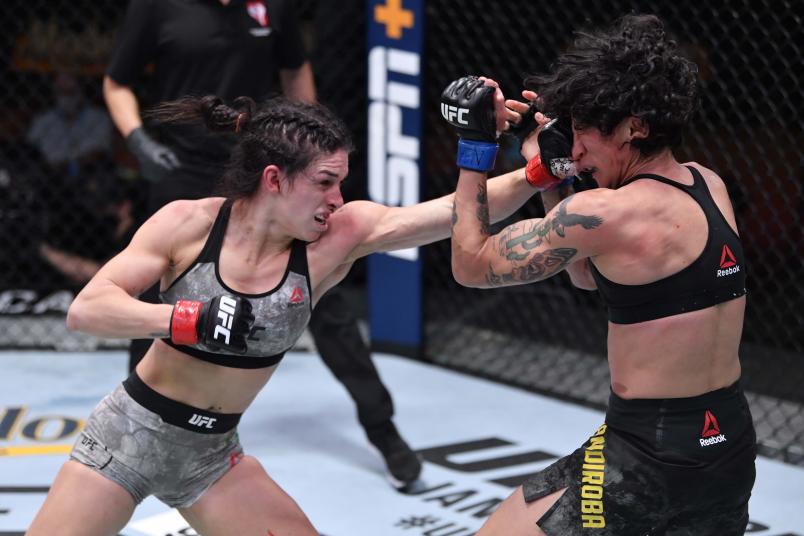 Riding a two-fight win streak, Dern looked her best ahead of her UFC 256 bout against Virna Jandiroba. Unlike most of her bouts up until that point, Dern showcased a well-rounded striking game, while being unsuccessful on all five of her takedown attempts.

Through the first five minutes, Dern was slightly more effective in volume and damage than her opponent. But in the second round, Dern faced real adversity for the first time in her career. Attempting a body kick, Jandiroba’s connected with a knee to Dern’s nose that appeared to break it while opening a cut that poured into Dern’s eyes after Jandiroba’s ensuing takedown.

Between rounds, Dern’s corner assured her that her nose was fine, even though it wasn’t, and to put it all on the line in the third round. Seemingly even heading into the final five minutes, the fight was there for the taking. Despite the injury, Dern marched forward, unafraid to stand and strike for the remainder of the bout.

Two minutes gone in the third, Dern landed the biggest punch of the night – a right that wobbled Jandiroba back up against the cage. The two slugged it out for the remainder of the fight, with Dern securing the unanimous decision victory on the scorecards.

The 2016 jiu-jitsu world champion was already known for exceptional grappling talent, but this fight showed that Dern could stand for 15 minutes and hold her own against a ranked strawweight contender.