UFC Heavyweight Serghei Spivac Believes His Main Event Bout With Derrick Lewis Is The Perfect Chance To Announce That He Belongs Competing With The Division's Best.
By E. SPENCER KYTE, ON TWITTER @SPENCERKYTE • Jan. 31, 2023

Serghei Spivac doesn’t remember the exact date that he moved to Las Vegas and shifted his preparations to Xtreme Couture.

“It was shortly before the fight with Jared Vanderaa,” he said ahead of his first UFC main event against Derrick Lewis this weekend.

That fight with Vanderaa occurred in February of 2021 and was the second consecutive triumph in a three-fight winning streak for the heavyweight from Moldova that showed he was making strides as a competitor. A short-notice loss to Tom Aspinall paused his upward ascent, but victories in 2022 over Greg Hardy and Augusto Sakai have the 27-year-old “Polar Bear” once again trending in a positive direction.

Preview Every Fight On UFC Fight Night: Lewis vs Spivac

“Good training partners, very ambitious,” he says when asked about his experiences working at the Las Vegas institution, which has returned to being one of the top gyms in the sport over the last few years, in part because of a wave of transplants that have relocated to the city to take full advantage of the UFC Performance Institute and the ability to work at a world-class, all-in-one facility like Xtreme. “The coaches, the training partners, they know exactly what they are doing, and the sparring sessions are good.

“Everyone is very ambitious and happy to train.”

After starting his career with nine consecutive victories, Spivac struggled out of the gate upon reaching the UFC. 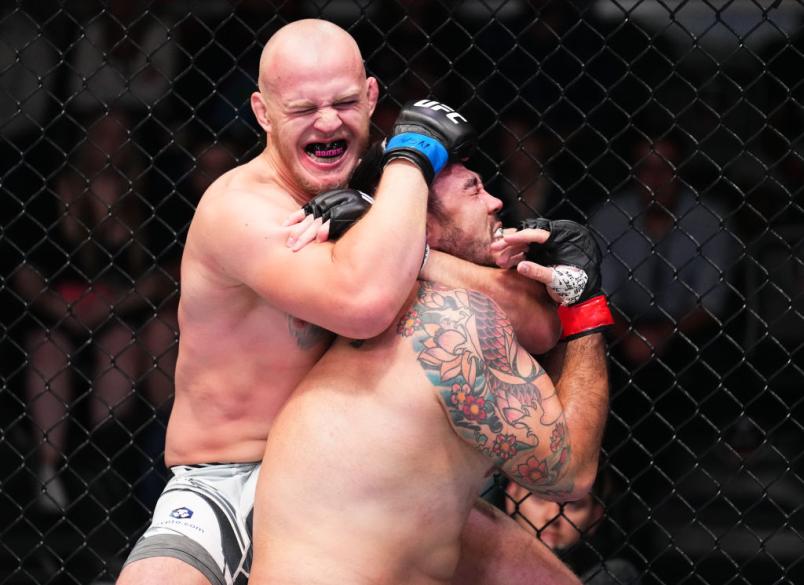 Serghei Spivac of Moldova works for a submission against Augusto Sakai of Brazil in a heavyweight fight during the UFC Fight Night event at UFC APEX on August 06, 2022 in Las Vegas, Nevada. (Photo by Chris Unger/Zuffa LLC)

He lost his debut in 50 seconds and landed on the wrong side of the cards two fights later against Polish veteran Marcin Tybura. At the time, the victory sandwiched between those efforts didn’t feel all that noteworthy, as it was his opponent’s third consecutive setback, and would trigger a one-year hiatus from competition.

In hindsight, Spivac putting Tai Tuivasa to sleep with an arm triangle choke — in Melbourne, Australia at that — feels more like a harbinger of what has followed, and the growth he’s exhibited over his last five fights.

When I ask about the development he’s experienced since relocating to Las Vegas, Spivac turns the question around on me.

“Can you tell me how you feel about that? Do you see the improvement?” he asks before we share a laugh at his deft ability to turn my request for personal insights into an opportunity for me to give him my thoughts on his recent performances.

READ: Fighters On The Rise

I tell him that his improvements are apparent in the way he’s performed, not just in terms of the results he’s garnered, but the way he’s approached his last two outings.

Against both Hardy and Sakai, the emerging heavyweight quickly turned to his grappling, recognizing his advantages on the canvas and how being forward to wrestle would sap the energy reserves of his thicker, heftier opponents.

He dispatched Hardy in the first, putting him on the deck less than a minute into the contest, and he never separated from him until the referee pulled him out of mount when stopping the fight. It took a little longer against Sakai, who lasted until just before the four-minute mark of the middle stanza, but he too eventually wilted as Spivac relentlessly took him off his feet and peppered him with short, heavy shots until the contest was halted.

I follow it up by asking him about where he feels he’s at in his development, and he again plays coy.

It’s impressive that he’s this loose and playful before his fight with Lewis, as Saturday’s contest is easily the most important bout of his career.

While you could make the argument that each of his last four outings have fit that description — and I wouldn’t necessarily argue otherwise — none of those contests were five-round main event assignments against the man that holds the record for the most knockout wins in UFC history and who has fought for both the undisputed heavyweight title and the interim heavyweight title over the course of his career. 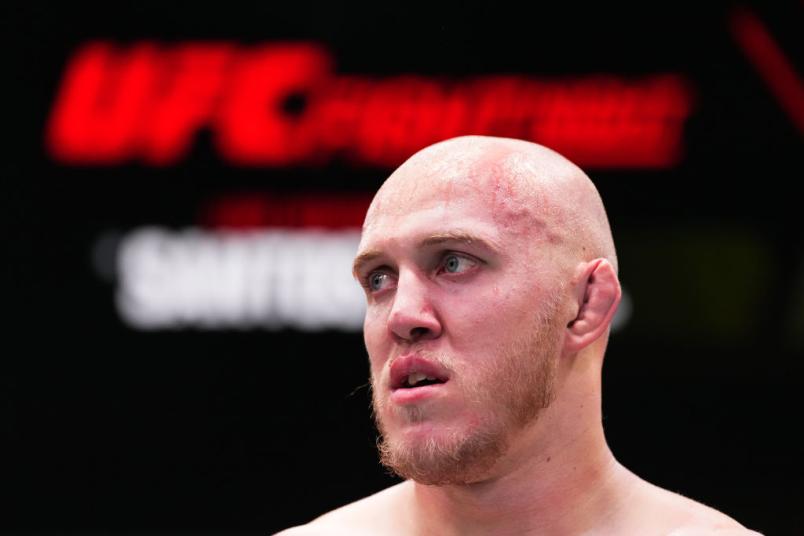 Serghei Spivac of Moldova reacts after his victory over Augusto Sakai of Brazil in a heavyweight fight during the UFC Fight Night event at UFC APEX on August 06, 2022 in Las Vegas, Nevada. (Photo by Chris Unger/Zuffa LLC)

“It doesn’t mean much at all,” he says when I ask him about headlining for the first time. “This is just the next fight that I must win.”

His response isn’t surprising, but it doesn’t come off as convincing either.

So when I push back, asking if this weekend’s matchup really doesn’t carry any greater significance to him, Spivac relents.

“Of course, you have to be a fool not to pay attention to the fact that you are the man on the marquee,” he offers, acknowledging the magnitude of being half of the headlining attraction. “I understand this means I’m taking specific steps to get somewhere, and that I’ve kind of made it to a certain place, but it has to continue to be ‘the next fight’ and something that I have to continue to achieve, as opposed to blowing it out of proportion and making it something bigger than it is.”

But this isn’t just another fight: a win on Saturday would be three straight for Spivac, and beating the heavyweight stalwart is something only top-tier talents have managed over the last several years.

Going into that group would signal to the masses that the maturing fighter from Moldova is ready to hang with the best the division has to offer, and deserves to be counted amongst that group himself.

“That’s exactly what I’m trying to show the world,” he says when I frame the fight in those terms.

So how does he get it done?

“I’m not an almighty to speak about what is going to happen on Saturday,” begins Spivac. “But what I do know is that I trained hard and I made sure to do 100-percent preparation to go out there and get my victory on Saturday night.”

Don't miss a moment of UFC Fight Night: Lewis vs Spivac, live from the UFC APEX in Las Vegas, Nevada on February 4, 2023. Prelims start at 10pm ET/7pm PT, while the main card kicks off at 1am ET/10pm PT.