The Latest Round Of UFC Hopefuls Close Out An Incredible Season Of Dana White's Contender Series
By E. Spencer Kyte, on Twitter @SpencerKyte • Sep. 27, 2022

Another season of Dana White’s Contender Series is in the books and what a season it was!

Season 6 established a new record in terms of the number of contracts awarded, with 44 fighters earning the call to the Octagon, capped by three-time Division I National champion Bo Nickal, who earned a dominant victory in Week 3 and returned on Tuesday night to collect a similar result opposite Donovan Beard to close out the season.

That’s seven of 10 events this season where every winner impressed the UFC boss enough to garner an opportunity to compete on the biggest stage in the sport.

Here’s how things played out.

Bo Nickal defeats Donovan Beard by submission (triangle choke) at 0:52 of Round 1 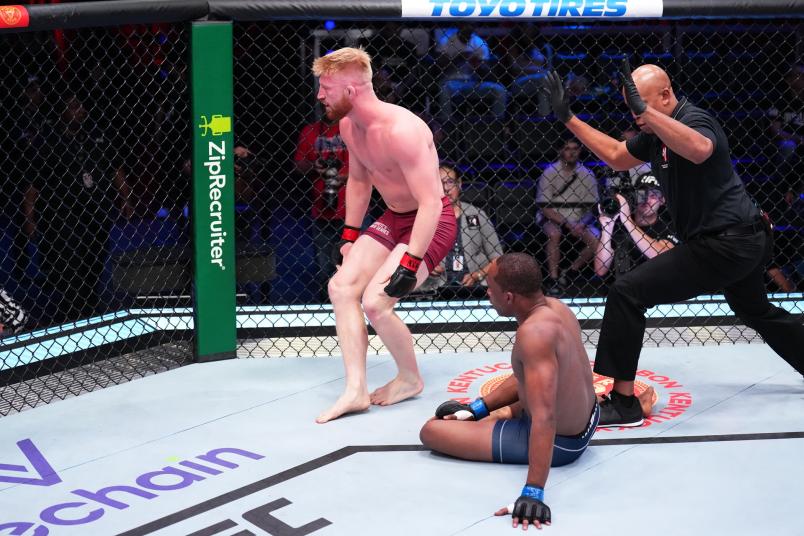 Dana White wanted a second look at Bo Nickal; he got less than 60 seconds, and it was more than enough.

The former Penn State standout dropped Donovan Beard with an overhand left almost immediately, chasing him to the canvas where he climbed into mount, looking for a guillotine. When that wasn’t there, he transitioned to a triangle choke and secured the tap. 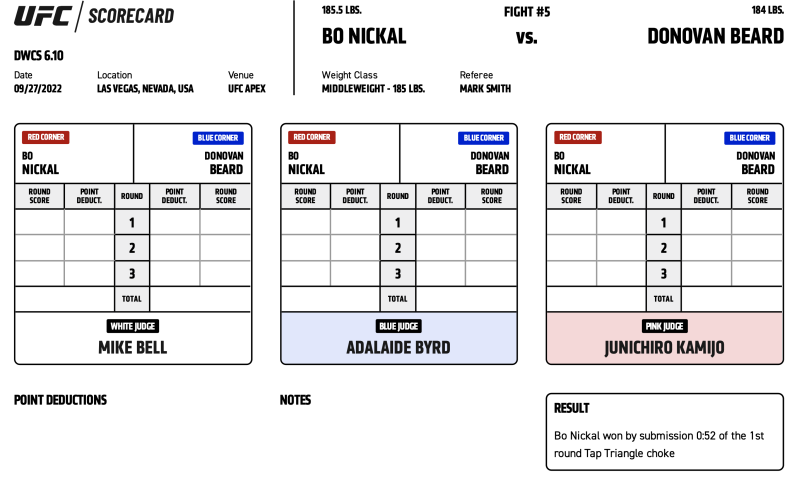 Nickal is the best prospect to hit the UFC in a number of years, and it’s going to be interesting to see how quickly he can climb the ranks in the middleweight division.

Sam Patterson defeats Vinicius Cenci by submission (rear-naked choke) at 4:18 of Round 2 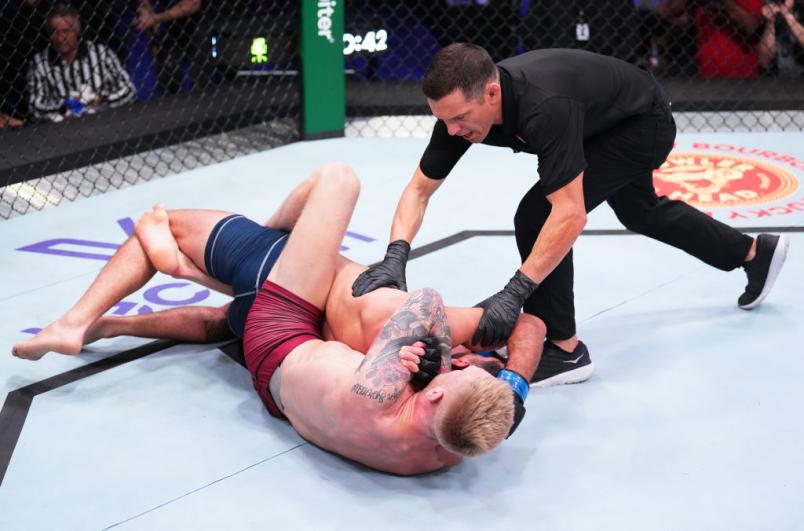 Sam Patterson had to navigate a tough first round, but the superior conditioning of the British lightweight served him well, resulting in a second-round submission win for the Watford man.

Vinicius Cenci came out aggressively in the first, working through Patterson’s range, wobbling the British fighter at one point in the opening stanza. But you could see Cenci fading late in the first, while Patterson remained fresh, and after finding his range on the feet, the Team Crossface fighter dominated on the canvas and found a choke. 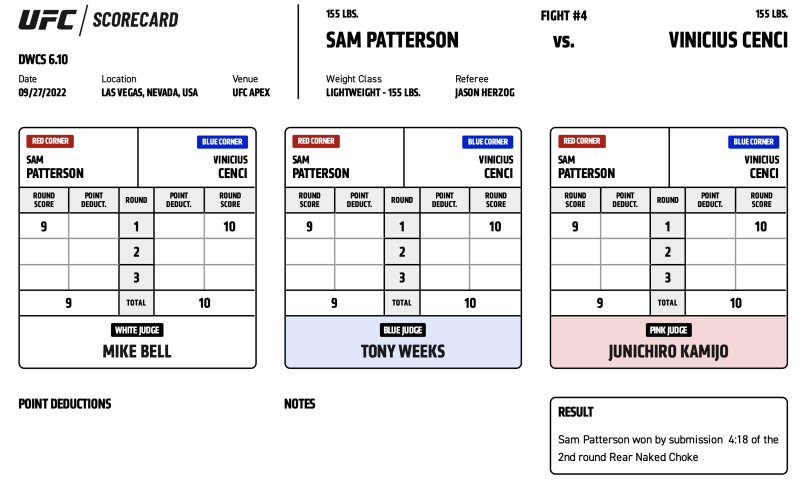 After hunting a D’arce and a power guillotine, Patterson eventually found his way to Cenci’s back, fishing his arm under the chin and securing the tap. Great win for the skilled lightweight to extend his winning streak to six and his unbeaten run to 10 fights overall.

Jack Jenkins defeats Emiliano Linares by TKO (strikes) at 4:30 of Round 3 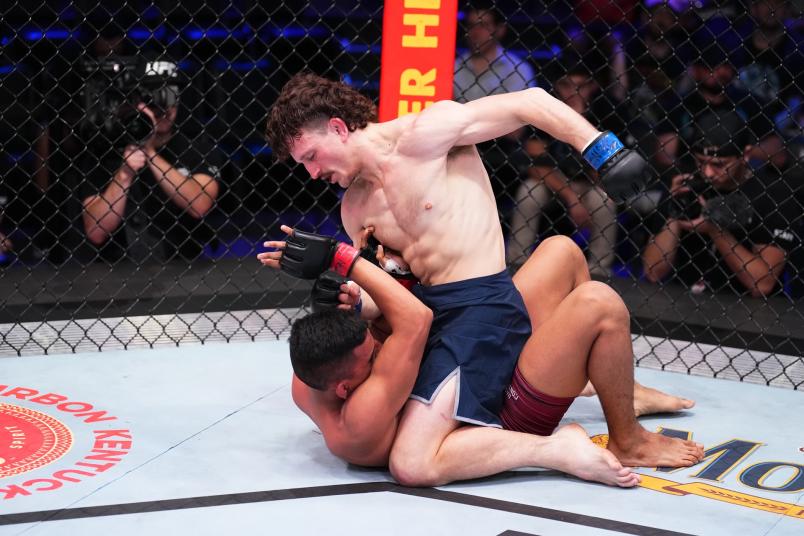 The confidence and IQ gap between Jack Jenkins and Emiliano Linares was apparent from the outset and was more evident as the fight progressed. Linares hung tough throughout, but Jenkins was the superior fighter throughout, earning a dominant decision win.

Jenkins hit an easy takedown in the first when Linares over-extended, spending the majority of the round in top position, dominating the action. After a dicy close to the opening round, he worked the body of Linares early in the second before effortlessly twisting him to the canvas once more. From there, Jenkins split the Ecuadorian featherweight open with an elbow and painted the canvas with his blood. 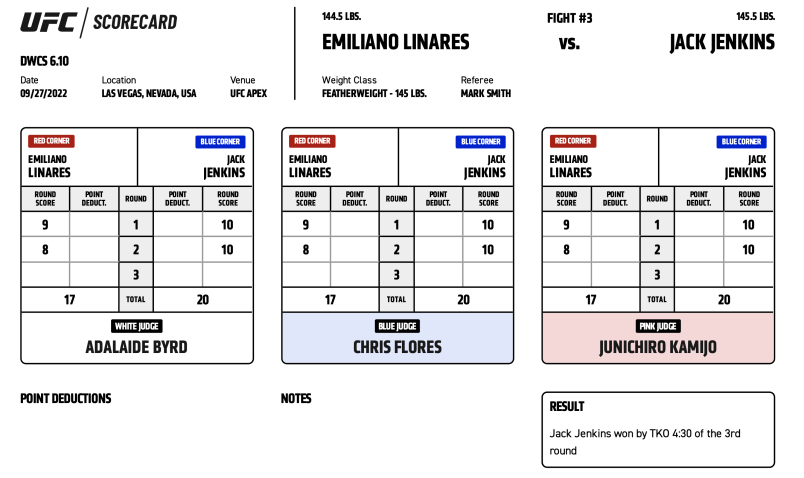 Linares came out hungry to start the third, and benefitted from an additional break when Jenkins’ protective cup became dislodged and needed to be fixed, but the Australian wisely swung him back to the ground and resumed attacking the cut, ultimately securing the finish late in the final round.

It was a gutsy effort from Linares, but a one-sided performance overall for Jenkins, who advanced to 10-2 with the win and should find himself in the UFC in the not too distant future.

Rafael Estevam defeats Joao Elias by TKO (strikes) at 2:25 of Round 2 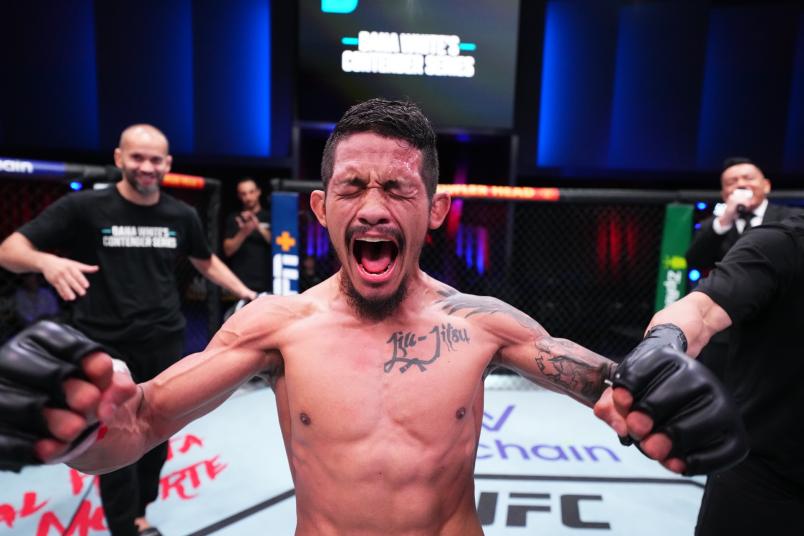 Rafael Estevam wasn’t bothered by Joao Elias’ penchant for finishing fights on the ground, spending the opening minutes of their clash navigating through submission attempts before turning dominant from top position.

Elias was hunting early in the fight, but as Estevam continued to defend and scramble well, you could see Elias starting to wilt. From there, Estevam turned up the offensive output, smashing home punches and elbows with no answer, finishing the opening frame in complete control. It was more of the same in the second, as the undefeated flyweight, as he put Elias back on the deck, clambered into top position, and continued raining down blows until Jason Herzog finally stepped in. 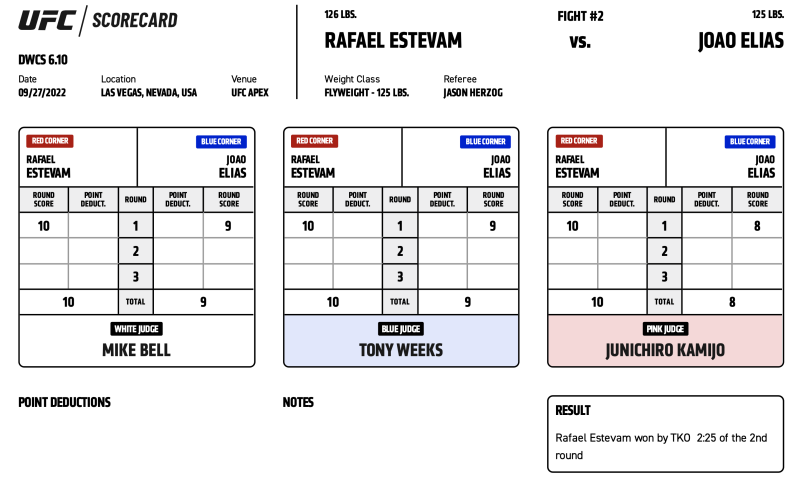 An absolutely dominant effort from the Nova Unit product, who moves to 11-0 with the victory, while Elias falls to 17-4 with the setback.

Mateus Mendonca defeats Ashiek Ajim by KO (left hand) at 0:48 of Round 1 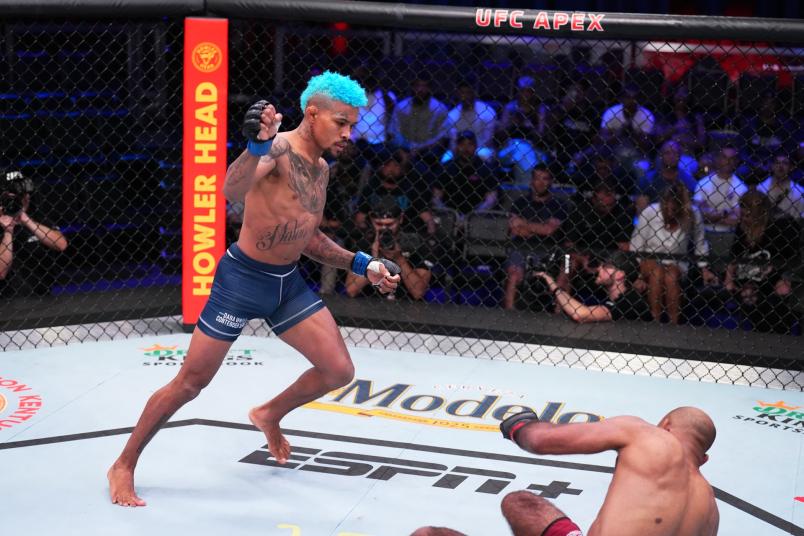 It took Mateus Mendonca less than a minute to push his record to 10-0!

The Brazilian bantamweight met Ajim in the center of the cage, where the two traded range-finding kicks to start. After landing a right hand behind the ear that took Ajim’s equilibrium, Mendonca followed up with a left hand to the jaw that put the Long Island MMA representative out.

Just a blistering way to start the night and a tremendous effort from the prospect from the Chute Boxe Diego Lima camp. 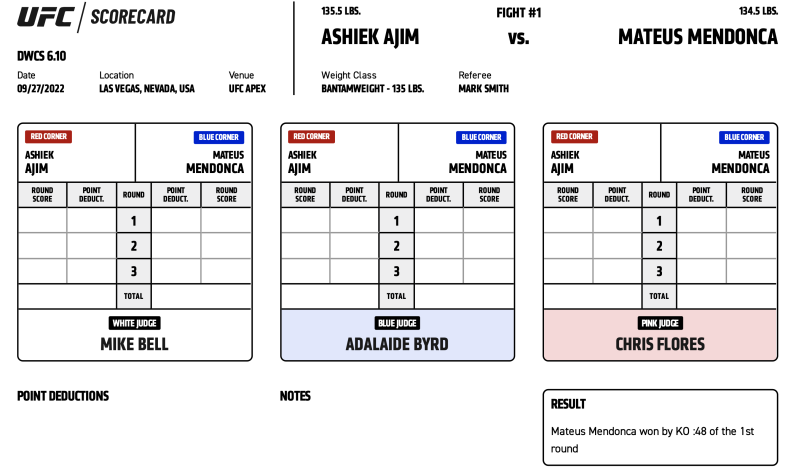