“Money Moicano” Has A Plan

It’s Thanksgiving, and in 2022, all mixed martial arts fans should be thankful for Renato Moicano.

Long considered one of the top featherweights in the UFC, Moicano began terrorizing the lightweight division in 2020, but it wasn’t until a stirring first-round finish of Brad Riddell at UFC 281 earlier this month and his follow-up interview with Joe Rogan that the world finally got on board the Money Moicano Train.

“After the fight, the fight was so good and I was so happy and I just started to talk about what was in my mind,” said Moicano about the energetic, funny, and impassioned chat with Rogan that went viral. “But I didn't plan that, and I don't know how it got so viral and people are so crazy about it.”

They are crazy about it, and about the 33-year-old Brasilia native, who learned that if you let people in to see your personality and hear your story, they’re going to get invested in you and what’s next. Moicano found that out in Madison Square Garden, and he’s enjoying everything that’s happened since, something he didn’t get to experience at 145 pounds, even when he was beating the likes of Calvin Kattar and Cub Swanson and facing off with Jose Aldo, Brian Ortega and Chan Sung Jung.

“When you say people forget, this is my fault because I didn't promote myself the way I should,” said Moicano. “Even though I fought former champions at featherweight and fought all the best, I was always too quiet. But nowadays, it's different. It's all about business and I have to make statements and I have to show myself to the audience so they can remember “Money Moicano.” And they will.”

We laugh as I tell him that I like the new Moicano.

“Everybody likes Moicano,” he said. “So let's go.”

Let’s go, indeed. So after kicking off his time at 155 pounds with four wins in two fights, when does the No.13-ranked lightweight contender hope to return to the Octagon?

“I have to talk to the UFC and see which one is going to be my next opponent,” he said. “I don't have any injuries, but I'm going to take a little bit of time off to go to Brazil and see my family for Christmas. In January, I'll come back to training, so I don't really know. Maybe March, but that's up to the UFC. If they want me to fight before, we can figure this out. I want to get back and fight as soon as possible to build that momentum and keep pushing me to the title one day.”

Does that mean beer and steaks in Brazil?

“We have to enjoy life,” Moicano laughs. “I love training, I love to be a UFC fighter, but sometimes you have to enjoy yourself a little bit - go to Brazil have a little beer, a little steak with family and friends, put some energy back, recharge the batteries and come back to the U.S. to do what I do and work hard and do my best at fighting.” 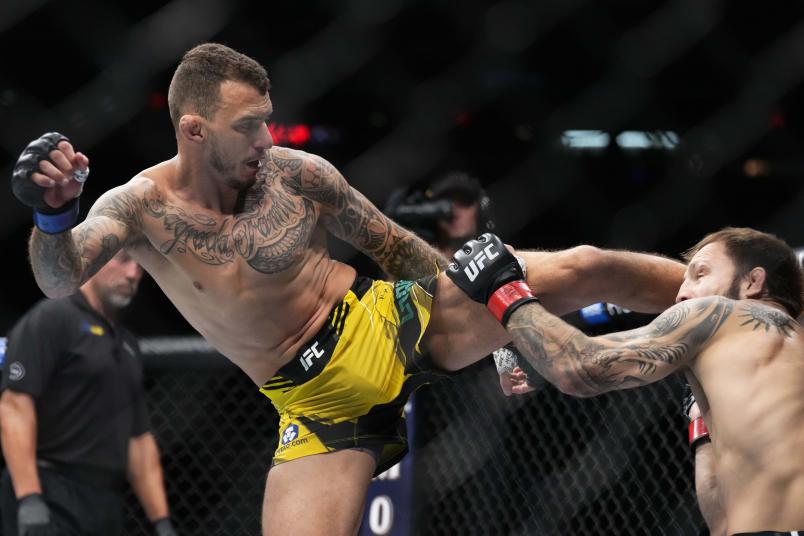 Renato Moicano of Brazil kicks Brad Riddell of New Zealand in a lightweight bout during the UFC 281 event at Madison Square Garden on November 12, 2022 in New York City. (Photo by Chris Unger/Zuffa LLC)

Moicano’s best has been on display against Riddell, and in wins over Damir Hadzovic, Jai Herbert and Alexander Hernandez. Even in a March loss to former world champion Rafael Dos Anjos, Moicano showed the heart and grit of a champion, something made even more notable by the fact that he took the bout on four days’ notice and still went the five-round main event distance. As for the fight itself, Moicano was still hoping to pull a miracle out of the hat late, even as it was slipping away. His emotions?

“I was mad and I wanted to take his head off,” he said. “In the fifth round, I thought, man, this is not fair. I didn't want a five-round fight because I was not training, and I knew it would be hard for me. So, in the fourth and the fifth I was thinking I'm gonna reach this guy in the fifth round, but I didn't have the training - the grappling, the scrambles, the cardio - so it was really hard for me and I was really tired, but I was trying my best because I could not look in the mirror if I just gave up. So even though I lost, I never gave up. I was mad with myself, with everything, because I knew I was taking a beating and nobody likes that, but I cannot give up, and I'm gonna try to beat you with everything, and that's what I did in the last round. I wish I had a little bit more time to train, like two or three weeks, and I would present myself even better. But I don't think of this anymore because it's in the past and people see my performances at lightweight. I have three finishes at lightweight, I lost a short notice fight against a former champion in a five-round fight I took on four days (notice), so the real fans know how good I am and now I am looking to the future.”

If we are looking back for a moment, it’s funny to point out that of his recent opponents, Hernandez is moving to 145 pounds, Dos Anjos is fighting next week at 170, and Riddell is taking an extended break from the sport. What is Moicano doing to these guys? 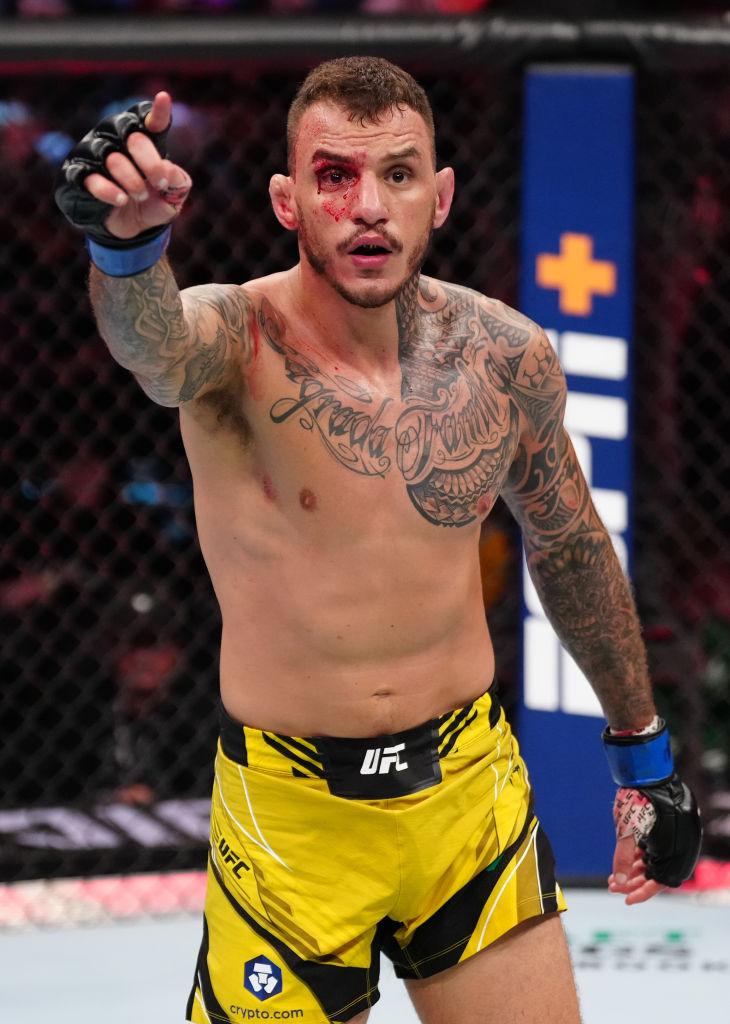 Renato Moicano of Brazil reacts after his submission victory over Brad Riddell of New Zealand in a lightweight bout during the UFC 281 event at Madison Square Garden on November 12, 2022 in New York City. (Photo by Jeff Bottari/Zuffa LLC)

“They are making the right decisions because Moicano is at lightweight right now, so it's better you run,” he laughs. “I don't have time to waste, I have money to make, and these guys, they should be scared because I've put in the work and put in the sacrifice, and I'm at the right moment to take over this division and I hope my last fight sent a message to the lightweight division and put them on notice. Even when I lost, I didn't really lose because every time I step in the Octagon, I put everything in there. It's to beat you and do my best. I hope all the lightweights understand that if they sign to fight me, they're f**ked because I'm in the best shape of my life.”

“A year to cement myself in the Top Ten and Top Five and show the world how good I am and make the fans excited about seeing Moicano fighting.”