There will be some who say that the kick Leon Edwards landed on the side of Kamaru Usman’s head, knocking off the crown of the now former welterweight champion in the process, was a lucky one.

That’s a bad take and an insulting one, given the reality that the technically perfect maneuver came at a perfect time for the Jamaican-born Brit, who was on his way to a disappointing decision loss to a man who defeated him already back in 2015.

Edwards is undefeated in fights like that. In life.

So on a night when Usman may have had the better game plan and maybe even more talent, Edwards wasn’t going to go home to Birmingham and tell his friends, his family and his mum that he stopped fighting. There was too much at stake and it had nothing to do with the money, fame and glory that comes with being a UFC champion. But it had everything to do with proving something to those watching him.

Edwards worked harder than most, but sometimes hard work in the gym and Octagon didn’t translate to the success he wanted. He doesn’t talk trash, he doesn’t post on social media more than spend time on his craft, and he wasn’t jumping off the side of the cage with kicks or throwing spinning moves on fight night. He’s an honest man and an honest fighter. I think we call guys like that “workmanlike.” Some would consider that an insult; others wear it as a badge of honor.

“At one point it did bother me,” Edwards told me of not getting the recognition he deserved.  “But now, I trust in my journey, and maybe that wasn’t my journey. This is the path I’m on, this is the path I chose for myself, this is what I’m doing, and I don’t feel I need to do what people want me to do. As long as they pay me my check, that’s all that matters. I’m in it to create wealth for my family and change my family’s future and that’s that. Whether you love me or hate me, that’s none of my business. I focus on competing, I focus on being one of the best in the world and focus on getting paid, and that’s it.”

And, as in any sport, if you keep winning long enough, you can’t be ignored. So from the time of his loss to Usman, Edwards just kept winning, fight after fight after fight. On Saturday, he got his shot, but outside of a good first round, it appeared that the long road to the title was going to end in Salt Lake City, Utah, a place Edwards didn’t even know of before he signed a contract to fight there. 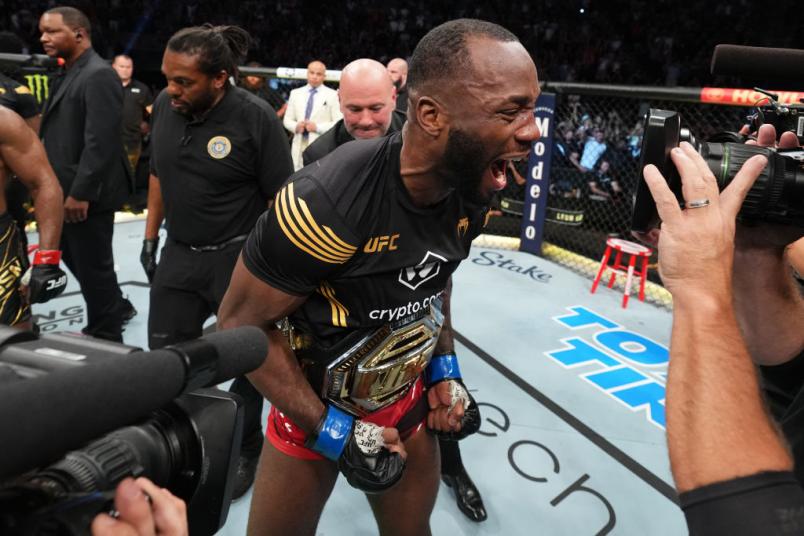 Leon Edwards of Jamaica celebrates after defeating Kamaru Usman of Nigeria in the UFC welterweight championship fight during the UFC 278 event at Vivint Arena on August 20, 2022 in Salt Lake City, Utah. (Photo by Josh Hedges/Zuffa LLC)

Usman was Usman, doing Usman things. That means, he was the best welterweight on the planet for 24 minutes. But a championship fight is 25 minutes, and in that final minute, Edwards remembered everything that got him to that moment in the first place. Not just 23 previous prizefights, but the previous 30 years of life experience.

Boom. At 4:04 of the fifth round, Leon Edwards became a world champion. And he did it his way, something he knew was going to work a long time ago, when he realized that nothing good comes easy. Whether it took a ten-fight unbeaten streak, 30 years of blood, sweat and tears, or 24 minutes on the losing end of the most important fight of his career.

Get Tickets For UFC 279: Chimaev vs Diaz

“It feels great that I’ve earned my way up,” Edwards told me before his first UFC main event against Donald “Cowboy” Cerrone in 2018. “I didn’t talk and then jump the queue. It feels good to know that I worked my ass off and am getting to where I want to get to. It’s a good thing for the kids around my area and in the gym to see that you can achieve great things just by being yourself and working hard.”

Nothing lucky about it.

UFC 278: Usman vs Edwards 2 took place live from the Vivint Arena in Salt Lake City, Utah on August 20, 2022. See the Final Results, Official Scorecards and Who Won Bonuses- and relive the action on UFC Fight Pass!