The Legacy Of Luke Rockhold

Reflections On The Former Champ Following His Retirement Announcement At UFC 278
By Thomas Gerbasi, on Twitter: @TGerbasi • Aug. 23, 2022

Vince Lombardi famously said, “Fatigue makes cowards of us all.”

Oh, the fatigue was there for the former UFC and Strikeforce middleweight champion last Saturday night in the high altitude of Salt Lake City, Utah, and he didn’t hide it as he prepared for two more rounds of battle with Paulo Costa.

Hands on his knees, blood streaming from his nose and a weary look on his face, Rockhold could have called it a day after the first round and put a cap on a 15-year career that any fighter would be proud of. 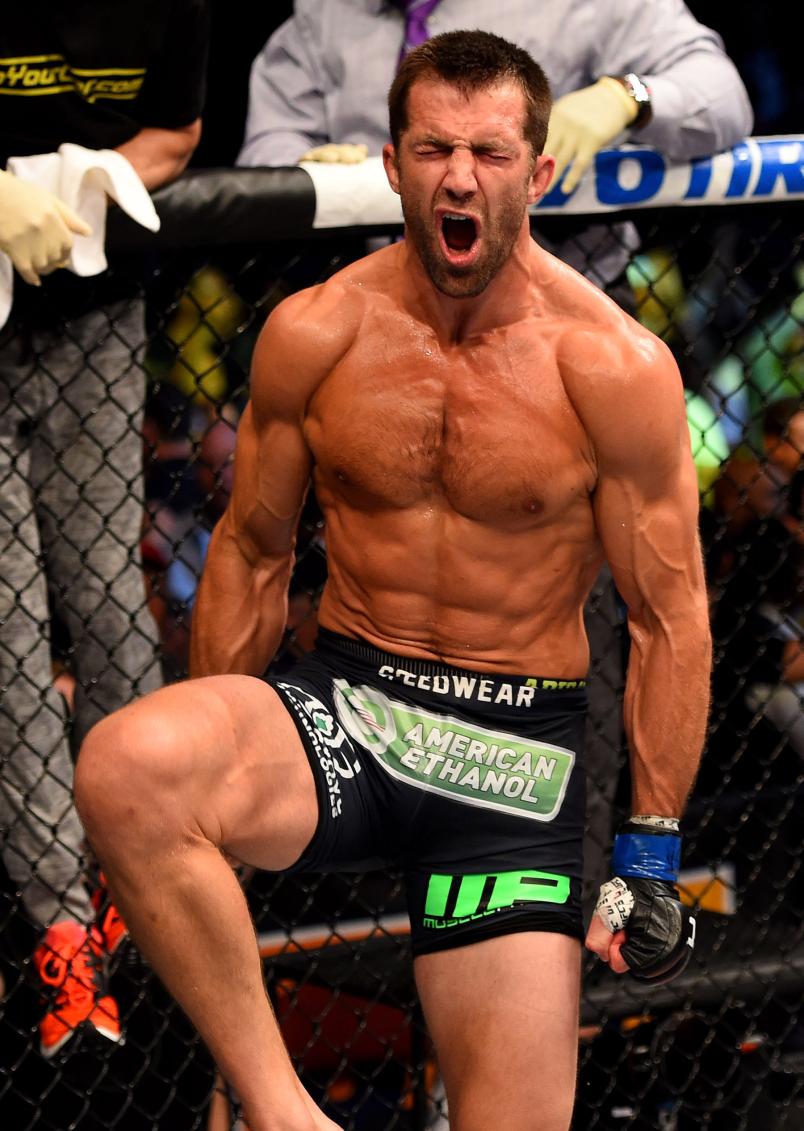 Luke Rockhold celebrates defeating Lyoto Machida of Brazil by tap out in their middleweight bout during the UFC Fight Night event at Prudential Center on April 18, 2015 in Newark, New Jersey. (Photo by Josh Hedges/Zuffa LLC)

But Rockhold had 10 minutes left to fight, so he fought. Fatigued? Yes. A coward? Never.

Maybe that should be the legacy of the 37-year-old Santa Cruz native, who did retire from the sport after his three-round decision loss to Costa. Rockhold, 16-6, made headlines for his titles, his feuds, his statements in the media, his relationships and his looks, but who should be remembered first and foremost as a fighter.

Get Your Tickets To UFC 279: Chimaev vs Diaz, Live In Las Vegas September 10

I never wavered in that belief when it came to Rockhold, well, at least not after he told me of taking on a bull (yes, a real bull) in a Costa Rica ring back in 2010. It became a running joke between us for years, as in, how can you be afraid of so and so? He’s not a bull.

“Why am I worried about Vitor (Belfort)?” laughed Rockhold before his UFC debut in 2013. “He ain’t no bull, he ain’t got no horns.” 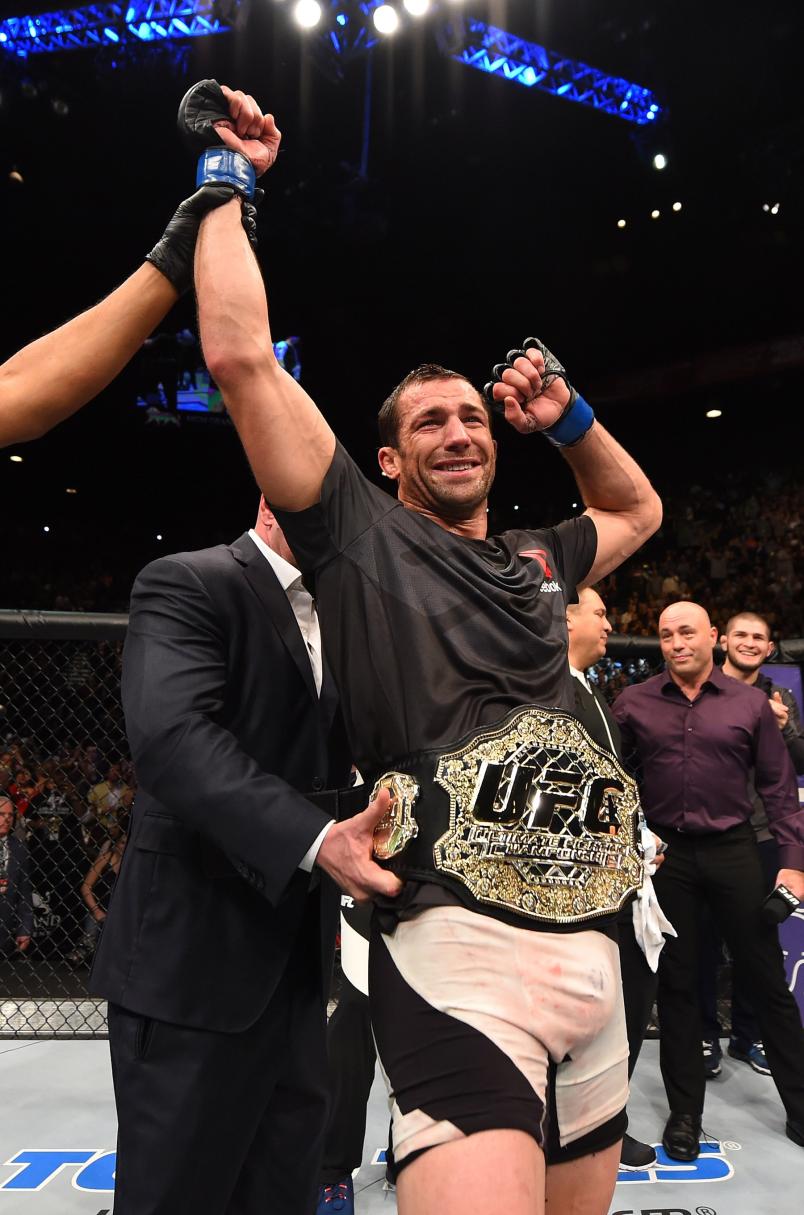 Luke Rockhold reacts to his victory over Chris Weidman in their UFC middleweight championship bout during the UFC 194 event inside MGM Grand Garden Arena on December 12, 2015 in Las Vegas, Nevada. (Photo by Josh Hedges/Zuffa LLC)

Rockhold lost that fight to Belfort, and many wrote him off as a good Strikeforce fighter, but someone who wouldn’t be able to hang on the UFC level.

They were wrong, and it felt good for Rockhold to stick it to the critics every chance he could as he bounce back to put together wins over Costa Philippou, Tim Boetsch, Michael Bisping and Lyoto Machida in succession. All four victories were finishes, and he grabbed three post-fight performance bonuses in the process. Oh, he was UFC level, all right, and he became champion of the world in his next fight, stopping Chris Weidman in the fourth round to take the UFC middleweight title.

It should have been the start of a long reign and the best days of his career, but bad luck, losses and injuries kept him from all of that. He lost his title to previous foe Bisping in a stunning upset in June 2016, returned with a win over David Branch, but three losses ended his career.

“I’ve been through so much the last few years,” and emotional Rockhold told Joe Rogan in the Octagon last Saturday night after taking his gloves off for the last time. “I can’t do this anymore. I gave it my all and…I’m f**king old.” 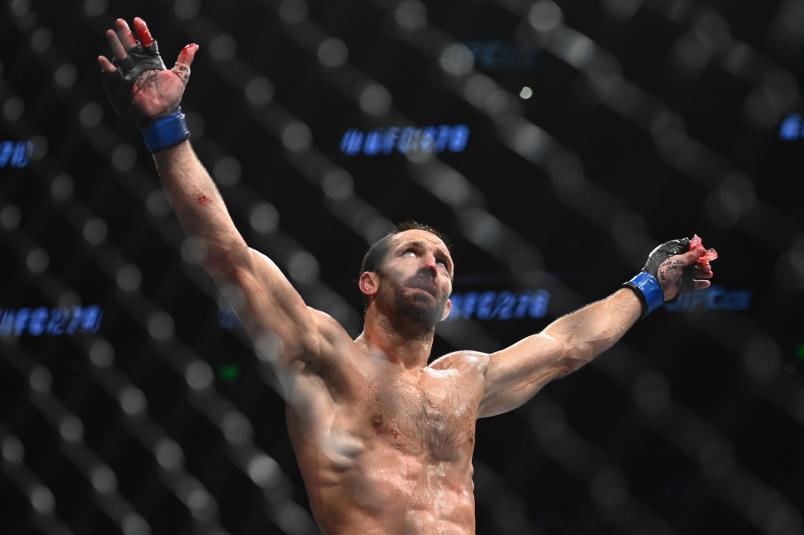 Luke Rockhold of the United States looks on in a middleweight bout against Paulo Costa of Brazil during UFC 278 at Vivint Arena on August 20, 2022 in Salt Lake City, Utah. (Photo by Alex Goodlett/Getty Images)

We all get there. But 99.9 percent of the population doesn’t experience it with millions watching. That’s what separates fighters from everyone else. It’s the willingness to not only test yourself in combat in a one-on-one setting, but to risk it all in short pants with your friends, family, and a room full of strangers right there with you. There is no scarier feeling, no more vulnerable feeling, and like Arturo Gatti before him, Rockhold didn’t have a poker face on as he readied for two more rounds of getting punched and kicked by one of the top strikers in his division. He knew what he was in for, he knew what he had left in the tank, but he still tried to win and he still fought.

And no, he didn’t get a win in his final fight, but there was glory in the attempt, and he will appreciate that – maybe not now, maybe not until he’s telling his kids and grandkids about the time he fought a bull in Costa Rica and then fought a dangerous Brazilian for 10 minutes while exhausted. But we know it happened. We know that the guy too good looking to be a prizefighter had everything you want to see in one.