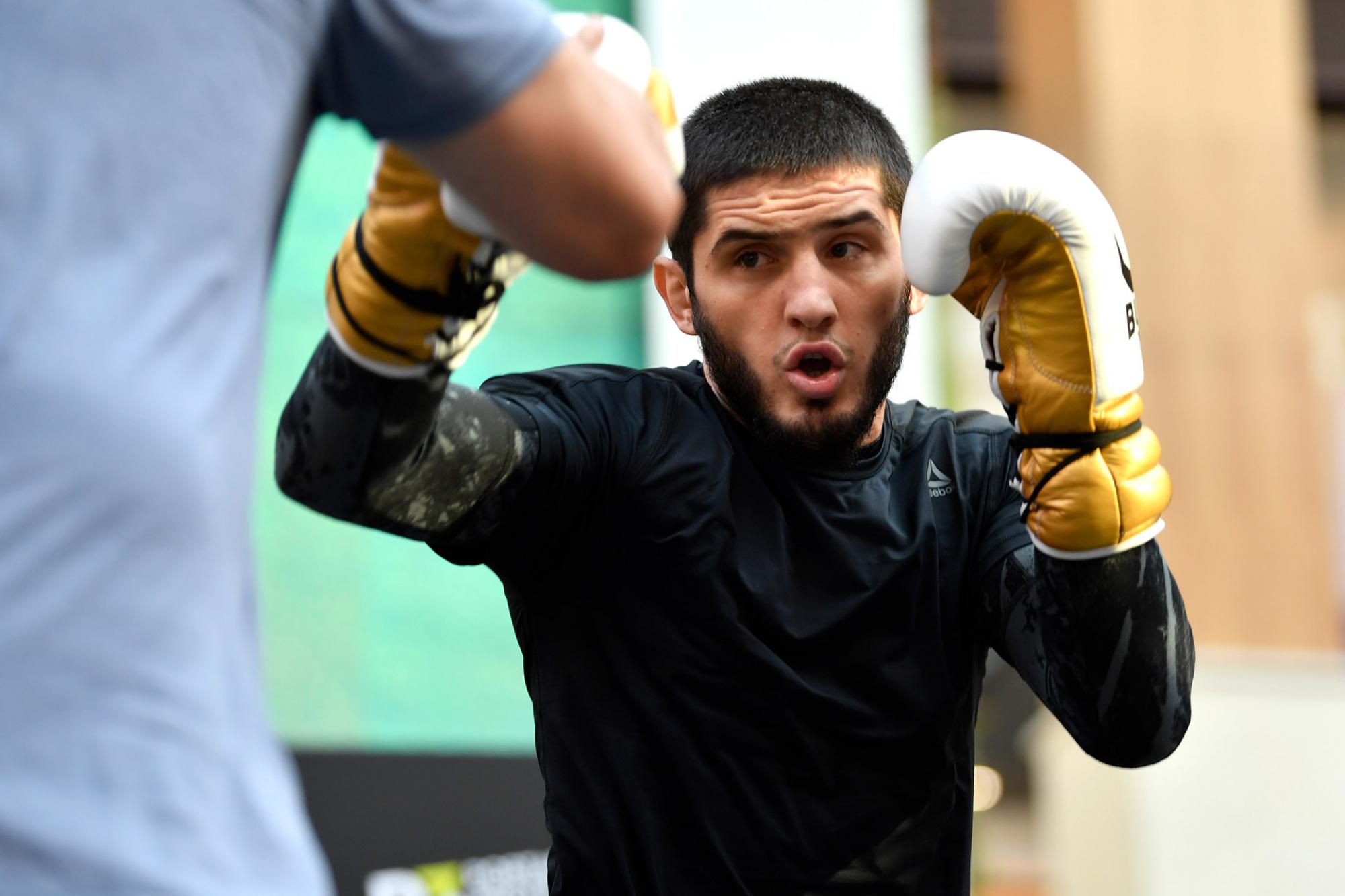 Islam Makhachev Is Ready For The Next Step

UFC Lightweight Islam Makhachev Has Dominated His Opponents Inside The Octagon And Is Ready For The Next Steps In His Career, Starting With His First Main Event
By E. Spencer Kyte, on Twitter @SpencerKyte • Jul. 16, 2021

Islam Makhachev is a man of few words, opting instead to primarily let his efforts inside the UFC Octagon speak for him.

“Step-by-step, I’m going to improve my English and do more interviews,” the surging lightweight contender said softly on Tuesday, just a few days before returning to action opposite Thiago Moises in this weekend’s main event.

While an opportunity to delve deeper into different subjects with the 29-year-old standout is welcomed, his current approach of saying very little and handling his business with scary precision and complete dominance has been working out just fine.

Undefeated over his last seven fights and brandishing a 19-1 record overall, Makhachev has become the boogeyman of the 155-pound weight class — the ultra-talented emerging threat who is undeniably dangerous, and therefore not someone the other members of the Top 10 are rushing to test themselves against.

His lone setback came in his second UFC appearances, a matchup against Brazilian veteran Adriano Martins at UFC 192 in Houston, Texas. After storming through everyone that had previously stood across from him, Makhachev was felled in less than two minutes, knocked from the realm of the unbeaten and knocked back in the congested depths of the lightweight division.

MORE UFC FIGHT NIGHT: Fighters On The Rise | Best Finishes From Saturday's Fighters | Conejo Brings The Wrestling | Thiago Moises Wants To Beat The Best | No Turning Back For Amanda Lemos | Billy Quarantillo Takes No Days Off

Since then, he’s been unstoppable, delivering dominant efforts against a collection of dangerous opponents, including Chris Wade, Nik Lentz, Gleison Tibau, and fellow rising star Arman Tsarukyan. Last time out at UFC 259, he steamrolled veteran Drew Dober, turning in the kind of performance that made everyone watching recognize that there is a new contender in the lightweight division.

“Everybody knows Drew is a high-level striking guy,” he said of Dober, whom he submitted in the third round after controlling the action on the canvas in the opening two frames. “I can strike with him, but I know my wrestling skills, my grappling skills are much better than his, so I used those more.”

Saying that his grappling skills are more formidable than Dober’s is factual, but also still undersells what Makhachev brings to the table in terms of his wrestling and submission game.

A long-time training partner of Khabib Nurmagomedov, he’s long been viewed as the “heir to the throne” — the one to take over when the undefeated superstar called it a career — and with Nurmagomedov now retired and focused on coaching, the overwhelming consensus amongst those that follow the sport closely is that it is Makhachev’s time to shine.

“Now he’s a big guy,” he said of Nurmagomedov, poking fun at the former champion’s size now that he’s no longer competing, echoing playful sentiments he shared on Instagram. “For sparring, he’s not my weight class now.

“I’m very happy because close to me, I have guys that are champions, who know all the roads,” Makhachev added when asked about the influence training with Nurmagomedov has had throughout his career, shifting the focus from just “The Eagle” and casting it out to his various elite training partners and teammates. “This is a big motivation for me.”

Coming up as Nurmagomedov’s understudy feels like a position that could carry heaps of pressure, especially in such a talent-rich division and in the wake of someone who ran roughshod over an elite collection of opponents.

"I have to show my best. My goal is to finish him. I have to finish this guy."@MakhachevMMA talks about his main event matchup against Thiago Moises at #UFCVegas31 and what a win could mean for him 🔉⬆️ pic.twitter.com/HDALe7eOWY

But Makhachev has always embraced the positives of the role, like the ability to learn from Nurmagomedov, to be a part of major fight camps and work with topflight coaches and training partners and be surrounded by mentors that will not only show you the road to success, but champion your efforts and serve as your personal hype men as well.

“There is not too much pressure,” the streaking lightweight said of following in Nurmagomedov’s footsteps. “Now a lot of people talk about, ‘You’re going to be the next champion,’ so I just have to train hard; that’s it.”

The journey to claiming the throne his friend, teammate, and coach abdicated last year has been a frustrating one at times, as his standing as a high-risk opponent has often left Makhachev struggling to land a fight that will help move him forward in the lightweight division.

But he wants to fight, whether it’s an opponent ranked first, tenth, or twentieth.

“I don’t want to wait for some top guys. I want to keep going, keep training, keep fighting, and one day I know I’m going to be champion.”

And he’s hopeful that another dominant showing on Saturday can expedite the process a little more. 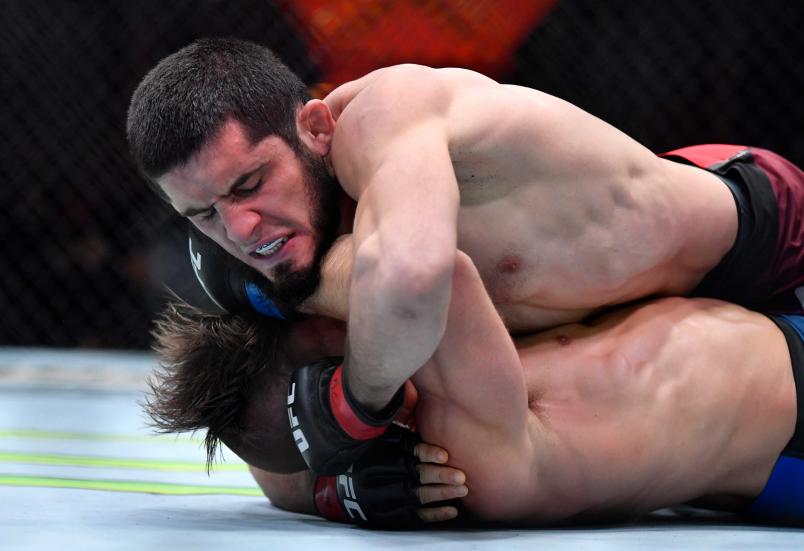 “He’s tough — I know, I saw his fights,” Makhachev said of Moises, who enters on a three-fight winning streak and is stationed at No. 14 in the lightweight rankings. “He has good striking, good jiu jitsu, good conditioning, but I am better than him everywhere.

No one has been able to finish the Brazilian as of yet, with each of his four career setbacks coming on the scorecards, including UFC losses to top contender Beneil Dariush and divisional dark horse Damir Ismagulov, who returned from a two-year hiatus to push his record to 20-1 earlier in the spring.

Becoming the first to get Moises out of there inside the distance is a tall order, but one Makhachev is game to attempt to tackle, and if he’s successful, there is only one thing he wants next.

“I hope it’s finally going to be somebody from the Top 10.”