UFC 280: Oliveira vs Makhachev Will Feature A Title Fight For The Vacant UFC Lightweight Belt, But Before Then We Break Down Vacant Title Fights Of The Past, Some Of Which Leading To The Most Revered Championship Reigns
By McKenzie Pavacich, on Twitter @mpavacich_ • Sep. 20, 2022

On October 22, 2022, former lightweight champion Charles Oliveira meets Islam Makhachev in UFC 280’s main event live from Abu Dhabi. They will compete for the vacant lightweight title stripped from Oliveira after he failed to weigh-in at, or under, the 155-pound limit prior to his bout against Justin Gaethje in May.

As we approach a month away from the highly anticipated bout, we break down several pivotal vacant title fights, some of which have led to eras regarded as the most revered championship reigns the UFC has seen. | Order UFC 280: Oliveira vs Makhachev Today! 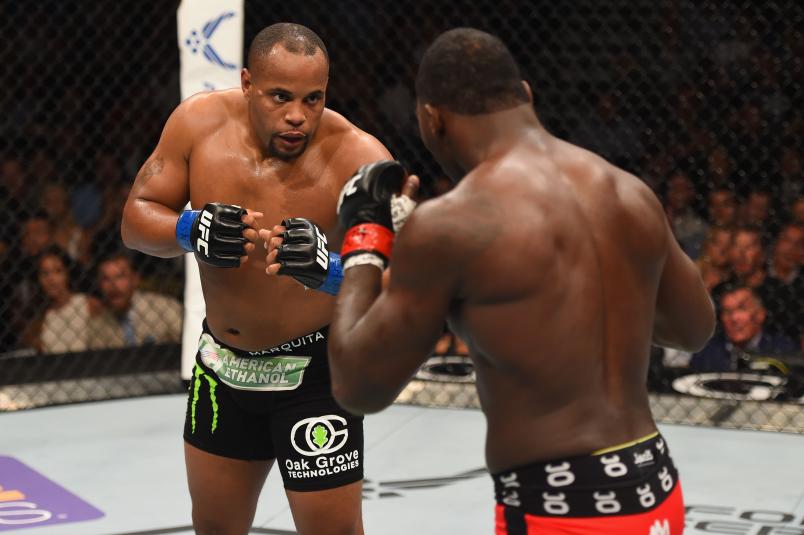 Daniel Cormier and Anthony Johnson face off in their UFC light heavyweight championship bout during the UFC 187 event at the MGM Grand Garden Arena on May 23, 2015 in Las Vegas, Nevada. (Photo by Josh Hedges/Zuffa LLC/Zuffa LLC via Getty Images)

On May 23, 2015, Daniel Cormier secured a third-round submission victory via rear naked choke over Anthony Johnson to claim the UFC light heavyweight title left vacant by Jon Jones. Cormier went on to defend this title three times during a reign that lasted 1,315 days. Cormier then vacated the belt after defeating Stipe Miocic for the UFC heavyweight title, becoming the second-ever champion to hold belts in two UFC weight classes simultaneously, on July 7, 2018.

Watch Cormier vs Johnson at UFC 187

On July 29, 2017, Cris Cyborg faced Tonya Evinger for the UFC women’s featherweight title left vacant by Germaine de Randamie. Cyborg defeated Evinger by way of third-round TKO and went on to defend her championship title twice over the course of 517 days before losing the belt to the current champion, Amanda Nunes.

RELATED: Run It Back To UFC 214 With Cyborg vs Evinger 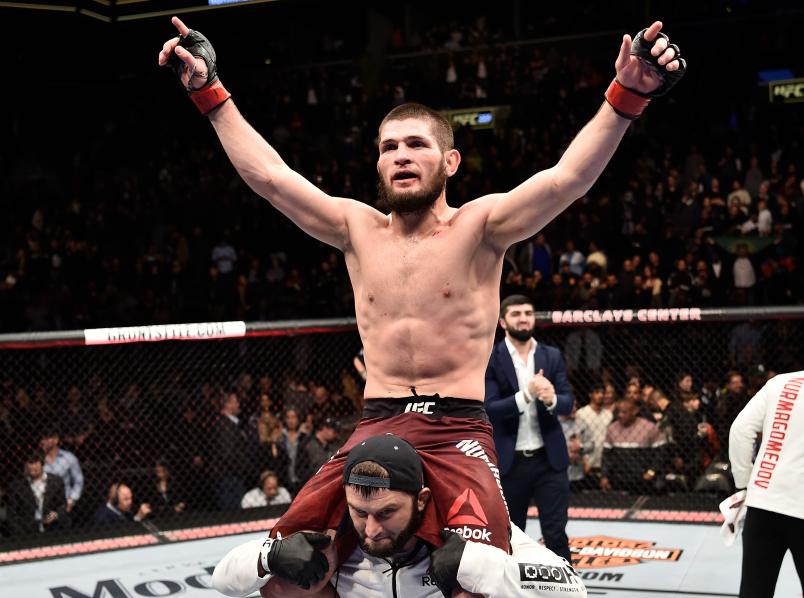 Khabib Nurmagomedov of Russia celebrates after a dominating performance over Al Iaquinta in their lightweight title bout during the UFC 223 event inside Barclays Center on April 7, 2018 in Brooklyn, New York. (Photo by Jeff Bottari/Zuffa LLC/Zuffa LLC via Getty Images)

On April 7, 2018, Khabib Nurmagomedov defeated Al Iaquinta by unanimous decision to become the 10th UFC lightweight champion, a spot left vacant by both Conor McGregor and Tony Ferguson. Nurmagomedov defended his title three times over the course of nearly 1,100 days before retiring as one of the all-time greats, with a final mixed martial arts record of 29-0.

The Reign of Khabib Begins: Watch On UFC Fight Pass

Flashback To Shevchenko vs Joanna At UFC 231 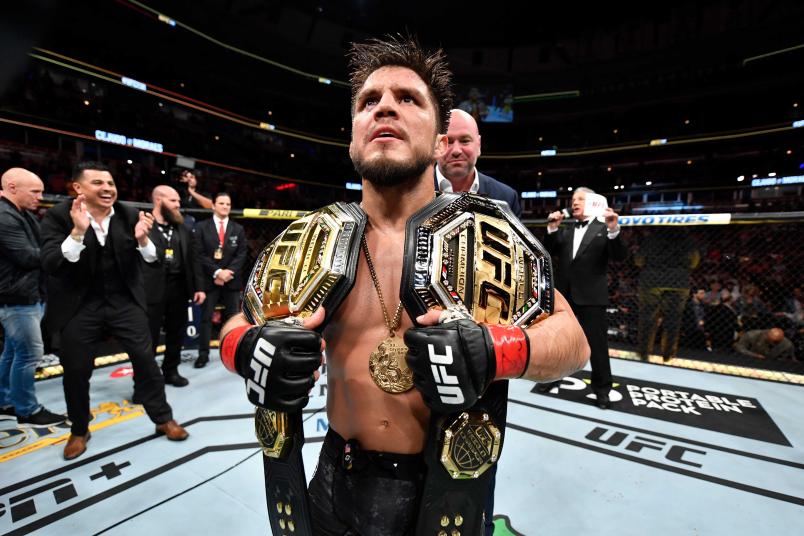 Henry Cejudo celebrates his TKO victory over Marlon Moraes of Brazil in their bantamweight championship bout during the UFC 238 event at the United Center on June 8, 2019 in Chicago, Illinois. (Photo by Jeff Bottari/Zuffa LLC/Zuffa LLC via Getty Images)

On June 8, 2019, Henry Cejudo moved up to bantamweight to challenge Marlon Moraes for the UFC bantamweight title, which was left vacant by TJ Dillashaw. Cejudo defeated Moraes by way of TKO with just nine seconds remaining in the third round to become the fourth-ever fighter to hold UFC championships at two weights simultaneously. Cejudo defended his bantamweight title once over the course of nearly a year, before announcing his retirement following his title defense victory over Dominick Cruz.

On July 12, 2020, Petr Yan was matched to face José Aldo for the vacant UFC bantamweight title left open by Henry Cejudo. Yan defeated Aldo with a fifth-round TKO, with just over 90 seconds remaining in the fight. No longer champion after his disqualification loss to Aljamain Sterling at UFC 259, Yan will face UFC superstar Sean O'Malley at UFC 280: Oliveira vs Makhachev.

Relive UFC 251 With Yan vs Aldo On UFC Fight Pass 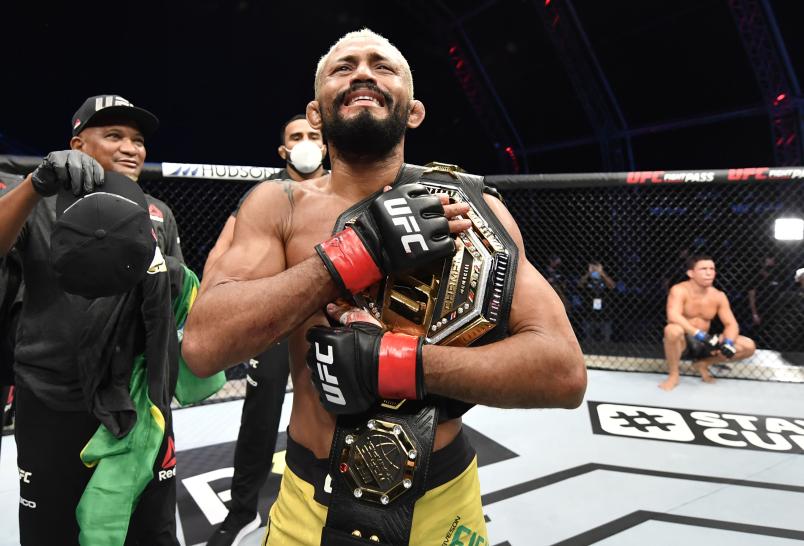 On July 19, 2020, Deiveson Figuriredo faced Joseph Benavidez for a second time to claim the vacant UFC flyweight title. The first time the two met, nearly five months prior, Figueiredo defeated Benavidez by way of TKO, but missed weight and was made ineligible to win the title. Figueiredo defeated Benavidez for the second time, by way of first-round technical submission, to claim the UFC flyweight title left vacant by Henry Cejudo. 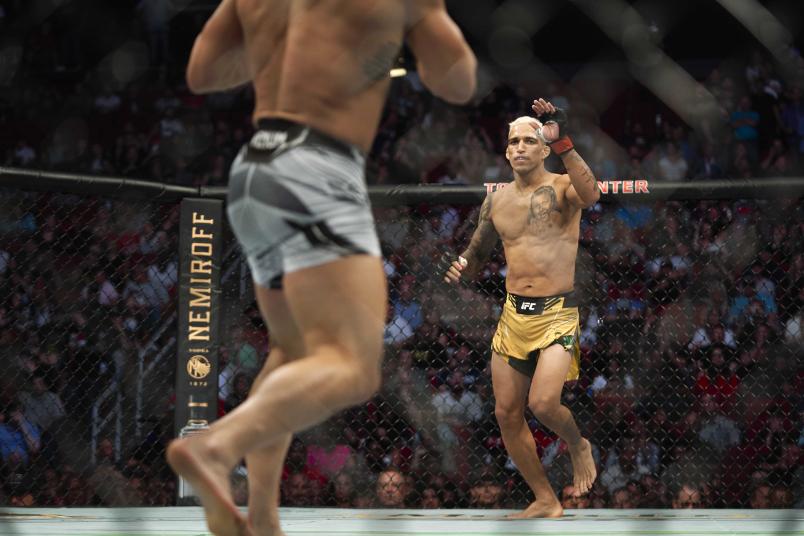 (R-L) Charles Oliveira of Brazil runs to meet Michael Chandler in their lightweight championship bout during the UFC 262 event at Toyota Center on May 15, 2021 in Houston, Texas. (Photo by Cooper Neill/Zuffa LLC)

On May 15, 2021, Charles Oliveira met Michael Chandler in the main event at UFC 262. Oliveira rode an eight-fight win streak coming into the bout, while Chandler only had one fight and one win in the UFC – a first round TKO against Dan Hooker.  They competed for the lightweight title, a belt vacated by UFC Hall of Famer Khabib Nurmagomedov, who relinquished the belt after retiring from mixed martial arts in October 2020. In a back-and-forth fight, that saw Chandler on the cusp of finishing Oliveira in the first round, “Do Bronx” mounted an epic comeback, earning a TKO victory only 19 seconds into the second round.

UFC 280: Oliveira vs Makhachev took place live from Etihad Arena in Abu Dhabi on October 22, 2022. See the Final Results, Official Scorecards and Who Won Bonuses - and relive the action on UFC Fight Pass!