Fighters On The Rise | UFC Fight Night: Dern vs Yan

There are only three months and 10 events remaining in 2022.

I don’t know about you, but that’s wild to me because it honestly doesn’t feel that long ago that we kicked off this year with Calvin Kattar beating Giga Chikadze and yet that was just under nine months ago. Where has the time gone?

The first leg in this decathlon of events to close out the year takes place on Saturday at the UFC APEX, with a card headlined by strawweight stalwarts Mackenzie Dern and Yan Xiaonan, who currently sit at Nos. 5 and 6 in the rankings, respectively.

Before the 115-pound contenders hit the Octagon, a host of others looking to elevate themselves into a comparable position in the not too distant future will grace the cage, and below I’ve spotlighted three such athletes for you to pay extra close attention to this weekend.

This is the October 1 edition of Fighters on the Rise. 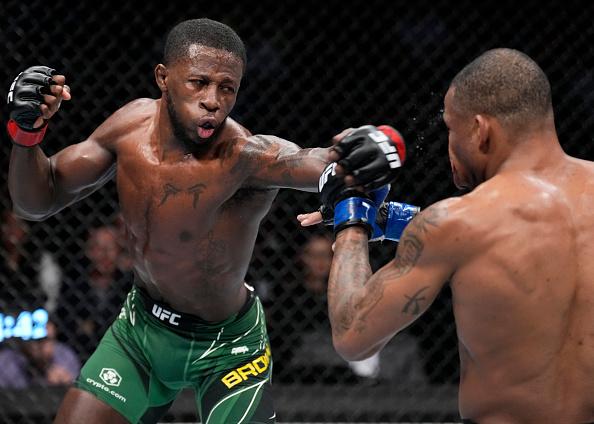 UFC talent search programs like The Ultimate Fighter and Dana White’s Contender Series (DWCS) have turned out a number of ranked fighters and emerging names over the last several years, with many of them earning time in the spotlight and acclaim amongst fans.

Surprisingly, that hasn’t really been the case with Brown, a Lookin’ for a Fight graduate who is tied with Alexandre Pantoja for most victories since the start of 2016 when it comes to competitors that matriculated to the UFC through one of these feeder series.

“Rudeboy” has actually been everything one could hope from in a fighter that was plucked from the regional circuit six fights and 18 months into his professional career. While he’s stumbled at times, the Queens, New York representative has showed tremendous growth over the course of his 13-fight UFC career, amassing a 9-4 record overall while honing his skills and learning to use his length and rangy striking abilities expertly.

The 32-year-old currently resides on the outskirts of the Top 15 at welterweight despite carrying a three-fight winning streak and victories in five of his last six into this weekend’s clash with Francisco Trinaldo. Both his wins and his losses have aged well, as stoppages of Bryan Barberena, Warlley Alves, and Alex Oliveira aren’t easy to come by, and defeats at the hands of Belal Muhammad, Niko Price, and Vicente Luque are nothing to hang your head about, and it feels like only a matter of time before Brown gets the opportunity to test himself against someone with a number next to their name.

A victory over Trinaldo could be what’s needed to make that happen.

The Brazilian veteran remains ultra-competitive in this range, having also won five of his past six assignments, including two straight heading into Saturday’s engagement with Brown. Despite being 44 years old and 36 fights into his career, “Massaranduba” is still durable, powerful, and a dangerous opponent for anyone looking to make headway in the 170-pound ranks.

Brown has been a quality find and a successful developmental story thus far in his UFC career, and with a victory on Saturday, he could become the latest fighter from the promotion’s talent search ventures to land a place in the rankings.

Castaneda is another talented, surging bantamweight that has simply been swept under by the never-ending crush of competitors pushing forward in the hyper-active 135-pound weight class.

After losing his promotional debut on short-notice to Nathaniel Wood (on Fight Island), the 30-year-old Castaneda has produced back-to-back stoppage wins heading into Saturday’s clash with Daniel Santos. In February of 2021, he knocked out Eddie Wineland, and then following almost exactly a year on the sidelines, Castaneda returned to action and secured a third-round submission win over Miles Johns to push his record to 19-5 overall.

In a division like bantamweight, where key matchups happen seemingly every weekend, fighting as infrequently as Castaneda has over the last two-plus years is always going to be limiting, regardless of how good you look. The momentum he built with his impressive win over Johns in February isn’t gone, but it’s been diminished, as too many other skilled fighters have stepped into the Octagon since then and delivered similarly strong efforts or better.

This weekend’s fight with “Willycat” feels like an opportunity for Castaneda to remind everyone of what he’s done of late and make sure that his name is added to the lengthy list of hungry fighters looking to climb the rankings the bantamweight division. Santos is an aggressive UFC sophomore from the Chute Boxe Diego Lima camp, and the kind of fighter that should bring the best out of the Minnesota-based veteran this weekend at the APEX.

Castaneda looked exceptionally sharp against Johns earlier this year, and if he can pick up where he left off on Saturday, he won’t be overlooked in the division for much longer.

(Ed. Note – The Castaneda vs. Santos bout will be contested at a catchweight of 140 pounds.) 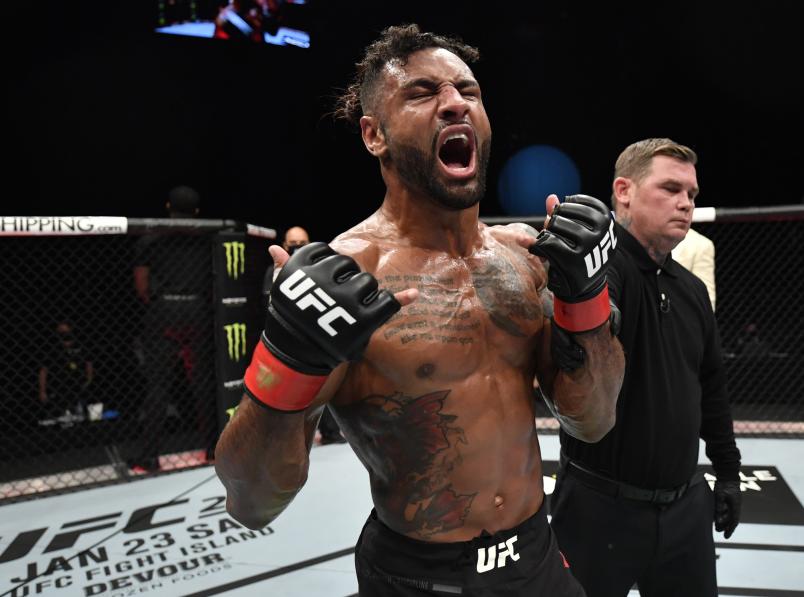 Mike Davis reacts after his victory over Mason Jones in a lightweight fight during the UFC Fight Night event at Etihad Arena on UFC Fight Island on January 20, 2021 in Abu Dhabi, United Arab Emirates. (Photo by Jeff Bottari/Zuffa LLC)

When Mike Davis’ foot touches the canvas inside the Octagon on Saturday night in Las Vegas, it will end a 620-day absence.

“Beast Boy” last competed on January 20, 2021, welcoming then-undefeated former Cage Warriors double champ Mason Jones to the Octagon for the first time. The two got after it in Abu Dhabi, turning in one of the best three-round fights of the year, with Davis emerging victorious and handing Jones his first professional setback.

It was Davis’ second consecutive win — a gritty follow-up to his third-round sleeping of Thomas Gifford just a couple months earlier — and a reminder that the Floridian and former DWCS competitor was one to keep an eye on in the lightweight division. But he went into the fight dealing with shoulder issues, suffered a broken hand that required multiple surgeries in the bout, and then dealt with COVID, which only prolonged his absence.

A fight with Jai Herbert in March fell through, but now Davis is primed to return, and paired with Viacheslav Borshchev in a matchup that has the potential to be an absolute banger.

Initially slated to face Uros Medic, Borshchev tapped in last month when “The Doctor” was forced out, and arrives in Las Vegas looking to get back into the win column after getting out-wrestled by Marc Diakiese in his sophomore appearance earlier this year. The Team Alpha MMA representative and DWCS grad won a back-and-forth battle against Chris Duncan to land his UFC deal and crumpled Dakota Bush with a body shot in his debut, and will likely be looking to stand with Davis on Saturday.

Davis is a dark horse in the lightweight division — a physical specimen with good size, speed, and power to go along with crisp, technical striking. If he can get through Borshchev and stay healthy, he’s someone that could make some noise in the 155-pound ranks in the next 18 months.