Fighters On The Rise | UFC Fight Night: Lewis vs Spivac

Make Sure You Know Which Athletes Have Momentum Heading Into UFC Fight Night: Lewis vs Spivac At The UFC APEX
By E. Spencer Kyte, on Twitter @SpencerKyte • Nov. 15, 2022

In the wake of last week’s excitement at Madison Square Garden in New York City, the action shifts back to the UFC APEX for the penultimate time in 2022 and the final fight card of the month, with 24 competitors making their way two-by-two into the Octagon on Saturday evening.

Capped by a heavyweight contest between stalwart Derrick Lewis and ascending competitor Serghei Spivac, and featuring a host of matchups between fighters looking to make a statement to close out the year, this fight card has some serious “didn’t see this one coming” vibes as we head towards the weekend, much like the first Fight Night event of the month.

Everything You Might've Missed From UFC 281: Adesanya vs Pereira

With that in mind, here are three competitors to keep a close eye on Saturday night when they step into the Octagon.

This is the November 19 edition of Fighters on the Rise. 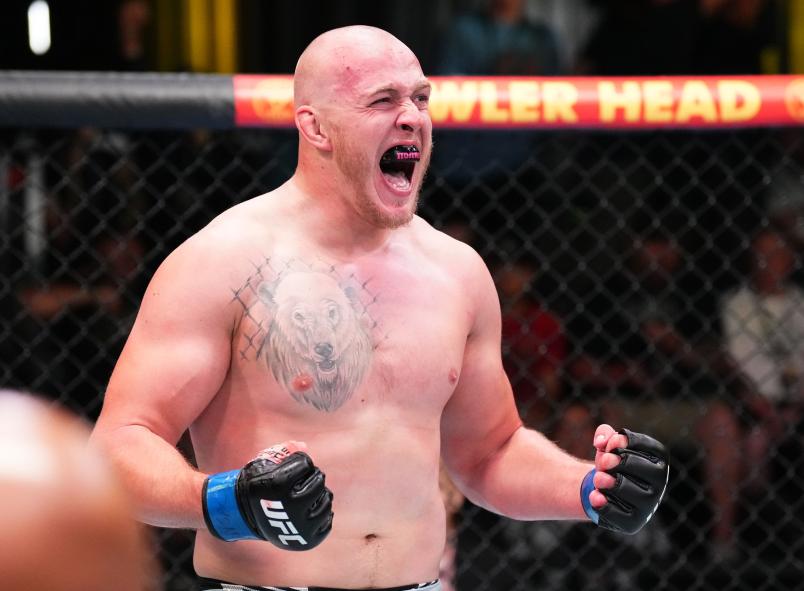 Serghei Spivac of Moldova reacts after his victory over Augusto Sakai of Brazil in a heavyweight fight during the UFC Fight Night event at UFC APEX on August 06, 2022 in Las Vegas, Nevada. (Photo by Chris Unger/Zuffa LLC)

It’s rare that a headliner finds their way into this space, but Spivac has been on a slow, steady rise over the last two-plus years, carrying him into his first headlining assignment this weekend opposite heavyweight stalwart Derrick Lewis.

Because he had an uneven start to his UFC tenure, it’s easy to forget that Spivac’s first triumph inside the Octagon came against Tai Tuivasa, as he submitted the man currently stationed at No. 4 in the rankings in the second round of their UFC 243 clash in Melbourne. A loss to veteran Marcin Tybura followed, but since then, the 27-year-old from Moldova has amassed a 5-1 record, with his lone setback coming against British contender Tom Aspinall.

Last time out, Spivac showed his continued progress by playing to his strengths, dragging Augusto Sakai to the canvas, and finishing the Brazilian with strikes on the ground. While the victory over Tuivasa has aged nicely now that “Bam Bam” has turned things around and emerged as a bone fide threat in the division, the Moldovan’s dominance over Sakai was still an eye-opening effort.

What increases the intrigue surrounding Spivac is that he’s still only 27 years old and not that many years into working with an elite coaching staff and collection of training partners. He’s set up shop at Xtreme Couture in Las Vegas and that has coincided with his surge in success of late, and as he continues to build there, even more impressive results may follow.

Saturday’s main event assignment against Lewis is the correct next step for the ascending heavyweight, both in terms of the level of competition and the initial opportunity to compete over 25 minutes, should the fight last that long.

Lewis is a Top 10 fixture and perennial contender with thunder in his hands and the ability to alter a fight with one shot at any time, which forces foes to be at their best every second they’re standing across from him. That’s the kind of dangerous test Spivac needs to take and pass if he wants to continue climbing the heavyweight rankings.

He’s looked very good in each of his first two 2022 assignments and each of his last four victories. If he can tap into that form on Saturday, a third consecutive win and a statement-making triumph over Lewis could follow and elevate the “Polar Bear” to new heights heading into 2023. 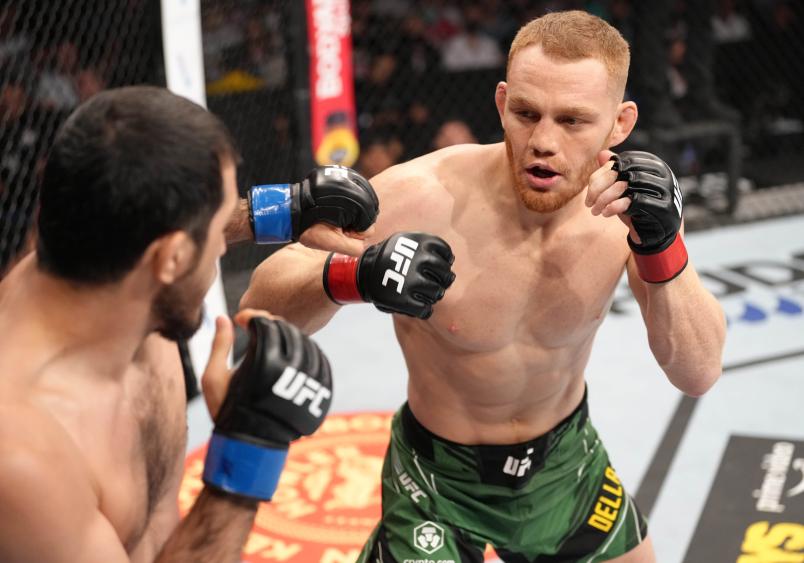 Jack Della Maddalena of Australia battles Ramazan Emeev of Russia in a welterweight fight during the UFC 275 event at Singapore Indoor Stadium on June 12, 2022 in Singapore. (Photo by Jeff Bottari/Zuffa LLC)

As we get closer to the end of the year, it’s time to start thinking about who is going to land where on “Year-End Awards” ballots, and when it comes to the “Rookie of the Year” award in the UFC, Della Maddalena has to be in the mix, if not the frontrunner.

The Scorecard | UFC 281: Adesanya vs Pereira

The 26-year-old Australian punched his ticket to the UFC with a unanimous decision win over Ange Loosa on Season 5 of Dana White’s Contender Series (DWCS) and was promptly booked to face former TUF Brazil winner Warlley Alves in his promotional debut. While it didn’t come to pass, just being paired off with Alves was a sign of how highly the promotion thought of the welterweight newcomer, and after a first-round stoppage win over Pete Rodriguez, he was once again booked into a fight that gave him an opportunity to make a real statement in the 170-pound weight class.

Della Maddalena faced Ramazan Emeev in his sophomore appearance in the Octagon, and after navigating a couple early, tricky entanglements, he collected a stoppage win at the midway point of the opening stanza, pushing his record to 12-2 and his winning streak to a dozen. Beating a 25-fight veteran with an 80-percent win rate in your second UFC showing — and doing so in the first round, as the first person to stop Emeev in the UFC — is the kind of thing that gets people’s attention, and all eyes will be on Della Maddalena as he makes the walk again this weekend to take on Danny Roberts.

The British veteran Roberts picked up a split decision win over Emeev last October, and then landed on the wrong side of the scores in a clash with Francisco Trinaldo at UFC 275 in May. He’s gone just 7-5 through a dozen UFC starts, alternating between teasing upside and offering inconsistency, but is a tall, rangy, athletic challenge for Della Maddalena this weekend, nonetheless.

His first two victories of the year are already enough to have Della Maddalena in the running for the Top 10 Newcomers this year, and with a third victory on Saturday, we could end up seeing the top freshman award making its way to Perth, Australia at the end of the year. 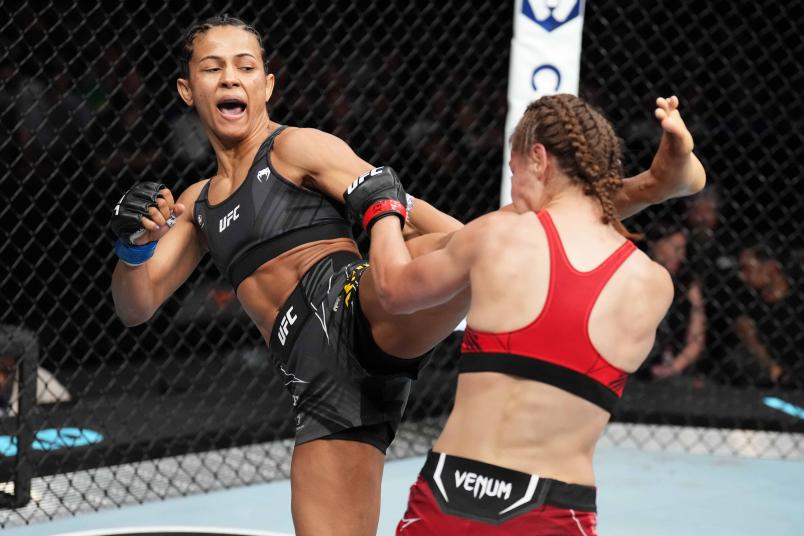 Natalia Silva of Brazil kicks Jasmine Jasudavicius of Canada in a flyweight fight during the UFC Fight Night event at Moody Center on June 18, 2022 in Austin, Texas. (Photo by Josh Hedges/Zuffa LLC)

Silva made her first foray into the Octagon in June, completely outworking Jasmine Jasudavicius to pick up her seventh consecutive victory and kick off her UFC tenure in style. The 25-year-old looked light on her feet and dynamic in her striking attack, getting the better of the Canadian DWCS grad from start to finish, never looking bothered at any point and pushing her record to 13-5-1 in the process.

As solid as that record is on its own at first blush, the reality is that Silva’s trajectory is even greater than her quality record even suggests.

The Team Borracha representative began her pro career in 2015 at age 18, lost her debut and three of her first four fights, and was 3-4-1 after eight appearances. Since then, Silva is 10-1, with her lone loss coming by decision against current strawweight standout Marina Rodriguez. While the level of competition hasn’t always been the greatest, she’s handled her business and showed her upside in her win over Jasudavicius, creating intrigue for her sophomore outing on Saturday night against Tereza Bleda.

A 20-year-old grappler from the Czech Republic, Bleda dominated Nayara Maia earlier this fall on Dana White’s Contender Series but didn’t come away with a contract. The undefeated prospect, who went 5-0 under the Oktagon banner before appearing at the APEX and scored a win over current UFC competitor Lucie Pudilova in an amateur bout in 2020, ultimately still got a call to the big leagues, and lands opposite Silva in an interesting clash of styles between two young, emerging talents in the 115-pound weight class this weekend.

This is an opportunity for Silva to build off her strong debut showing and potentially capture additional momentum to close out the year. Bleda is a legitimate prospect herself, and a strong showing for the Brazilian will surely resonate, positioning Silva as one to keep close tabs on in 2023 and beyond.