A Closer Look At The Athletes Going For UFC Glory Tuesday Night On DWCS
By E. Spencer Kyte, on Twitter @SpencerKyte • Sep. 12, 2022

Farid Basharat looks to join his brother in turning a Contender Series victory into a promising career in the UFC, but in order to do that, he’s got to get through Brazil’s Allan Begosso first.

Basharat, the younger brother of UFC bantamweight Javid Basharat, was supposed to compete earlier this season, and even successfully weighed in for his fight. But his opponent missed weight, resulting in his opportunity being pushed back. The 25-year-old is undefeated through his first eight starts, having only gone the distance twice, and has the same type of upside as his brother.

Begosso, who trains at Team Alpha MMA in Sacramento, enters sporting a 7-1-1 record, with his only loss coming late last year, by decision, in a clash for the vacant LFA bantamweight title. He’s since bounced back with a vicious first-round knockout by jumping switch knee, and should serve as a formidable test for the highly regarded Basharat here.

This has the potential to be the best fight of the season so far, as each man has shown UFC upside in the past and will be looking to make a statement in front of Dana White and company on Tuesday evening. 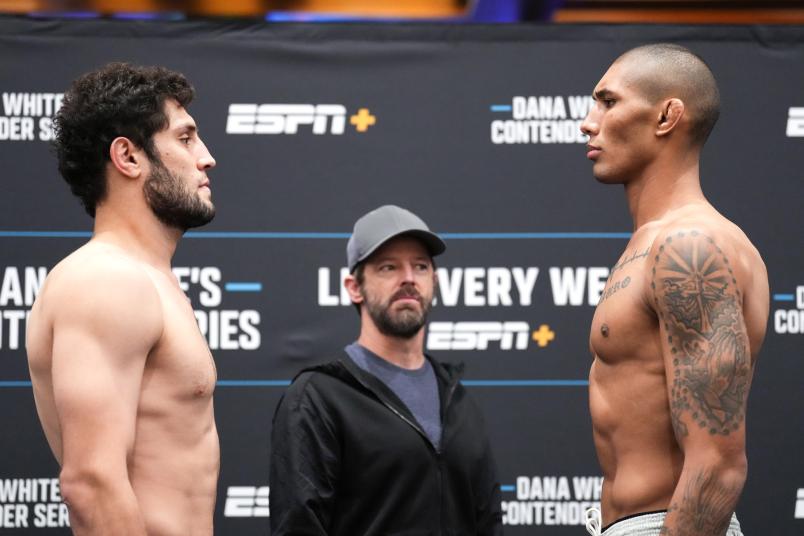 It’s a clash of middleweights with plenty of familiar names on their resumes as Ikram Aliskerov squares off with Mario Sousa.

The 29-year-old Aliskerov owns a 12-1 record that includes wins over Denis Tiuliulin and Nah-shon Burrell, with his lone setback coming at the hands of Khamzat Chimaev. He’s won four straight since his April 2019 loss to “Borz,” and will look to continue to run of quality form this week in Las Vegas as he welcomes Sousa back to Dana White’s Contender Series.

Sousa fights in front of the UFC President for the third time in as many seasons this week, having earned a good win over Mariusz Ksiazkiwicz in 2020 before losing to Chidi Njokuani last year. He’s earned a pair of stoppage wins since then and looks to get a second Contender Series victory and hopefully a contract this time out.

Will Aliskerov join the only man to beat him on the UFC roster or will the third time be the charm for the Brazilian middleweight Sousa? 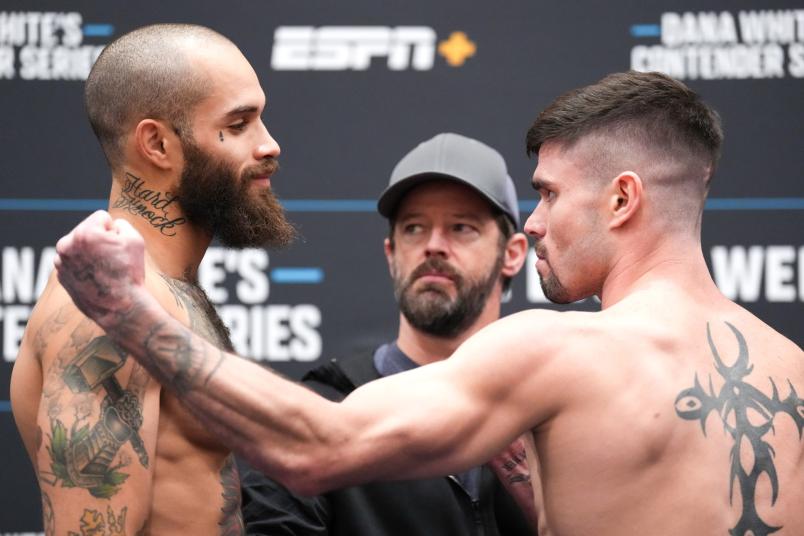 Undefeated lightweights Malik Lewis and Trevor Peek face off in a bout which carries significant “someone is getting put to sleep” vibes.

Following a 7-0 amateur career, Lewis has remained unbeaten since transitioning to the professional ranks, collecting five straight stoppage victories. The Jackson-Wink MMA representative has yet to see the third round as a pro but is taking a solid step up in competition here.

Peek didn’t have as clean an amateur career as Lewis, but he’s similarly started his pro run without a setback, winning each of his last six fights after his debut bout was declared a no contest. He’s already earned three first-round finishes this year, the most recent coming against former UFC lightweight Khama Worthy, so it will be interesting to see if he can collect a fourth 2022 win.

With 11 consecutive stoppages between them, the likelihood that this one ends with someone staring up at the lights wondering what happened are high. 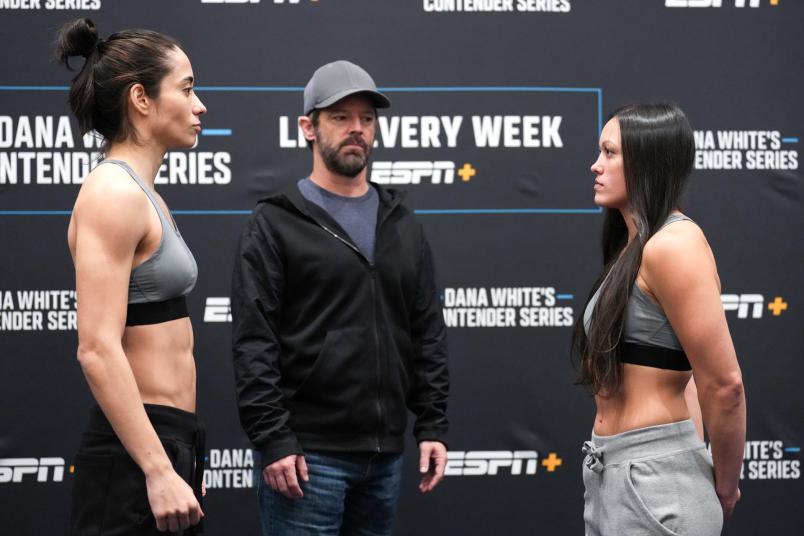 Bruna Brasil began her career at age 21, opening with a 1-2-1 record that included losses to future UFC competitor Ariane Carnelossi and current Invicta FC atomweight champion Jessica Delboni. Since then, the now 28-year-old is 6-0, earning finishes in five of those wins, including her mid-May victory over the previously unbeaten Yasmin Castranho at LFA 132.

Nicknamed “The Sawed-Off Savage” because of her diminutive stature, Marnic Mann has thus far been a dominant force inside the cage, entering Tuesday’s main event with a perfect 5-0 record. She earned stoppages in each of her first four appearances, including a third-round submission win over DWCS alum Pauline Macias, before going the distance and emerging on the happy side of a split decision verdict last time out.

Each of these women come into this one in top form, so it will be interesting to see if either of these flyweights follow the path forged by Shevchenko and Barber by earning an impressive win and graduating to the UFC. 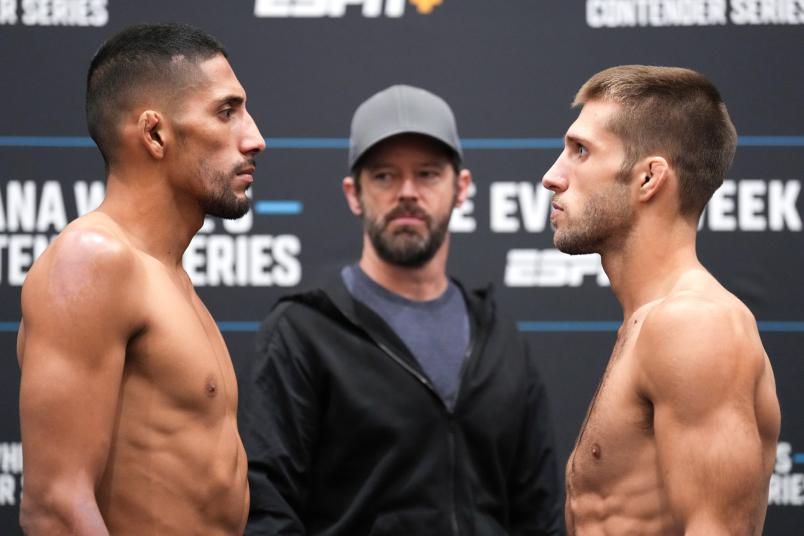 It’s a clash between bantamweight hopefuls in the middle of the card this week as Daniel Marcos returns to action after nearly three years on the sidelines and Brandon Lewis returns to Las Vegas looking to improve on his first appearance inside the UFC APEX.

Marcos is an intriguing competitor that is hard to get a read on at the moment, as he’s 29 years old, perfect through 12 professional bouts, but hasn’t fought in almost three years. He’s spent the last six months training in South Florida alongside the likes of Charles Rosa and Randy Costa, but with that much time off and a record forged against largely inexperienced competition, it’s hard to know what to expect from the Peruvian fighter on Tuesday.

Lewis competed last season on Dana White’s Contender Series, suffering a unanimous decision loss to Mo Miller that knocked him from the ranks of the unbeaten. He’s subsequently picked up a second-round stoppage win (via injury) in his return to action in mid-July and will look to make an even better impression on the UFC decision makers this week in the desert.

Can Marcos impress after a long stretch on the sidelines or will Lewis become another returning fighter to punch his ticket to the UFC roster?