Take A Closer Look At The Fighters That Make Up Week 5 Of Dana White's Contender Series Season 6. Catch All The Action Tuesday Nights On ESPN+
By E. Spencer Kyte, on Twitter @SpencerKyte • Aug. 22, 2022

Four weeks into Season 6, UFC President Dana White has invited 14 athletes to join the UFC roster, with last week marking the second time this season that all five victors have been awarded contracts.

It seems as if White’s message following a tepid first episode of the season has resonated with the competitors filing into the UFC APEX, as the subsequent three weeks have been action-packed, and this week’s collection of bouts shouldn’t be any different.

Here’s a closer look at the pairings for Week 5. 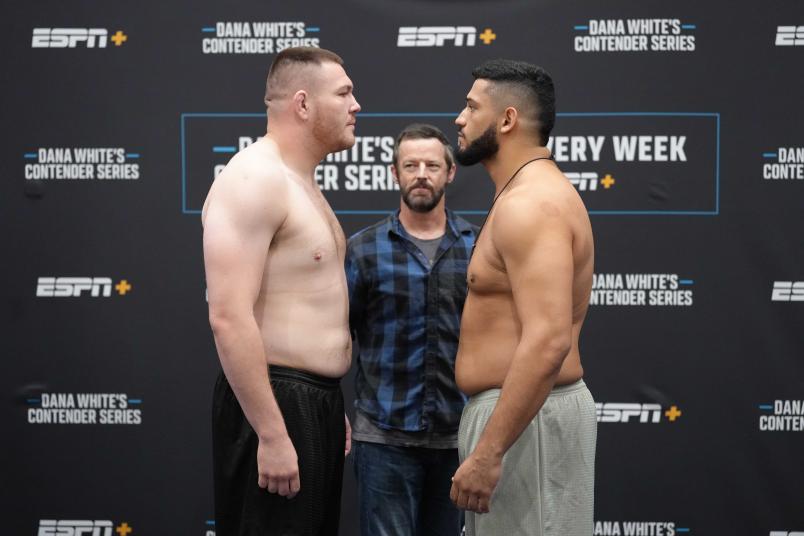 Unbeaten heavyweights with matching 5-0 marks headline the final episode of the first half of Season 6, as Brazil’s Eduardo Neves squares off with England’s Mick Parkin.

The 22-year-old Neves enters Tuesday’s main event having earned three straight first-round stoppage wins, most recently needing just 64 seconds to dispatch Andre Vieira at LFA 126 in Rio de Janeiro. Still very much in the developmental phase of his career, Neves has yet to go the distance, doing exactly what you hope to see a young prospect do against overmatched competition — get them out of there early and with little trouble.

Though they have matching professional records, Parkin has considerably more experience overall than Neves, as the British heavyweight went undefeated in eight amateur bouts before turning pro and rattling off five straight stoppage wins of his own. He’s made the rounds to work with some of the top talents and gyms in the United Kingdom and Ireland in advance of this contest, and will hope to show the fruits of those efforts on Tuesday night.

One of these men will be leaving Las Vegas dealing with their first professional loss, but will the other be leaving with a UFC contract in hand?

Gogoladze touches down in Las Vegas looking to become the latest fighter from the nation of Georgia to join the UFC roster. The 24-year-old arrives on a three-fight winning streak and having won nine of his last 10 bouts. He’s finished each of his last three opponents inside the first round, claiming the GFC welterweight title in his most recent showing in early June.

Flowers carries an 11-5-1 record and three-fight winning streak of his own into Tuesday’s contest, all of which have come this year. The run started with a unanimous decision victory over DWCS alum Tim Caron, which was followed by a second-round finish eight days later at LFA 130 and capped by a 43-second finish at LFA 131 two weeks after that.

Both men are in fine form as of late and show very limited interest in allowing the judges to decide their fates, so expect a fast-paced contest from the outset.

Erisson Ferreira da Silva and Jesus Aguilar comprise the fourth set of flyweights to step into the cage on Season 6 through the first five weeks.

The 31-year-old Ferreira da Silva returns to Las Vegas looking to improve upon his unanimous decision win last season. “Gato” got the job done against Qui Lun, extending his winning streak to five and shaking off a year-and-a-half’s worth of rust in the process, but it wasn’t enough to earn him a call to compete in the UFC.

Aguilar will look to use Ferreira da Silva already making an impression on the UFC President and matchmakers to his favor on Tuesday evening as he seeks to extend his winning streak to seven. The 26-year-old has never faced an opponent with a losing record and boasts a 2020 regional title win over Edgar Chairez, who impressed in a losing effort two weeks back against Clayton Carpenter.

Can Ferreira da Silva join the collection of returning fighters to secure victories and get called up to the main roster or will Aguilar pick up an eighth straight win and a UFC contract for himself?

The second bout of the night takes place in the bantamweight division, as American Joshua Wang-Kim takes on South Africa’s Cameron Saaiman.

The 29-year-old Wang-Kim had an extensive amateur career, amassing a 15-1 record where his lone loss came against future UFC competitor Jesse Strader. Now a couple years into his pro career, he enters with a 5-1 record, four finishes, and his lone loss coming by way of disqualification for illegal elbows in the third round of is LFA 127 fight with Arnold Jimenez earlier this year.

Just 21 years old, Saaiman went 5-0 as an amateur and carries a matching record into his clash with Wang-Kim on Tuesday. He went 25 minutes to claim a unanimous decision win and the EFC bantamweight title last time out, and will look to bank on that experience when he steps in with Kim here.

For being so early into their respective professional careers, both Kim and Saaiman have considerable experience, and it will be interesting to see how that translates when they square off with a UFC contract on the line on Tuesday.

It’s an all-Brazilian strawweight battle to kick off Week 5, as Rayanne Amanda squares off with Denise Gomes.

The 27-year-old Amanda is 11-5 in her pro career, having won four straight (all by stoppage) and six of her last seven. Engaged to former DWCS competitor Kolton Englund, she’s logged time training Stateside with Kru Bob Perez in Houston, and will look to maintain her winning ways when she steps into the cage on with Dana White and company looking on.

Gomes is another member of the Parana Vale Tudo team that relocated to Las Vegas a couple years back. The group, which includes former strawweight champ Jessica Andrade and Gomes’ partner, UFC bantamweight Karol Rosa, has enjoyed solid success since the move, and Gomes will look to reap the benefits for herself this week at the UFC APEX.

Which Brazilian hopeful will emerge victorious, and which one will leave disappointed?