Highlighting UFC’s Biggest Stars Who Made Their Initial Marks On Dana White’s Contender Series And Has Continued To Impress Throughout Their UFC Careers
By Kevin Schuster, On Twitter @KevinESchuster • Jul. 21, 2022

Dana White’s Contender Series has proven to be a steppingstone for rising MMA stars, giving up-and-comers the opportunity to showcase their skills in front of UFC President Dana White. Typically given one opportunity to prove themselves, fighters on DWCS can earn a UFC contract if their performance is on par with current UFC talent.

In this series, we showcase DWCS grads who have started to rise the ranks since earning their UFC contract on the show. 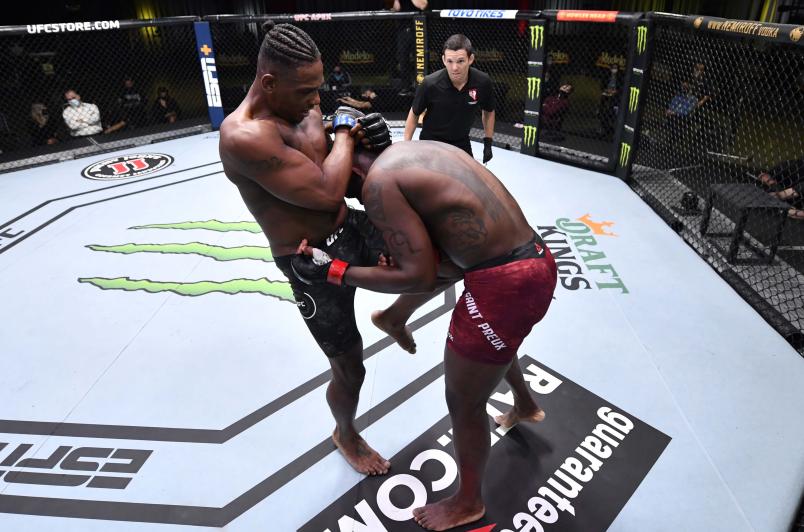 The UFC light heavyweight division has changed title holders twice in the last nine months, and the rankings never seem to be at a standstill. Rising the ranks is Dana White’s Contender Series grad Jamahal Hill, who isn’t afraid to challenge himself early in his UFC career and take on some of the best fighters in the division.

Defeating Alexander Poppeck in his DWCS bout, Hill fought only two bouts inside the UFC before facing Top 15 caliber opponents, the first of which was then-No. 15 Ovince Saint Preux at UFC Fight Night: Hermansson vs Vettori.

Saint Preux entered the UFC in 2013 and has a fair share of finishes in the Octagon, including four submissions by Von Flue choke, the most in UFC history. Up until that point, Hill was known primarily for his striking. With a diverse skillset, “Sweet Dreams” can put opponents away with heavy hands, knees or elbows.

After a back-and-forth first round, Hill outboxed Saint Preux in the second round, landing heavy combinations every time “OSP” moved to a conventional stance. Landing a flurry of strikes up against the cage, Hill earned the second-round TKO and his first victory against a ranked opponent in the Octagon.

The then-undefeated Hill faced his toughest challenge to date in his next bout, No. 8-ranked Paul Craig. One of the most feared grapplers in the UFC, Craig was able to pull guard and lock in an armbar that dislocated Hill’s elbow. Despite fighting through the pain briefly, the referee stepped in and stopped the fight.

It was a quick bout, but one Hill can certainly learn from moving forward. In his next bout at UFC Fight Night: Font vs Aldo, Hill challenged No. 14 Jimmy Crute, a well-rounded opponent who has earned three victories by either armbar or kimura.

This was the next best challenge for Hill, testing himself against someone who has won similar grappling exchanges as the one “Sweet Dreams” lost to Craig. But this fight never reached the mat. Just over 20 seconds in, Hill showed the discrepancy in power, landing a right hook that momentarily sent Crute to the floor.

Nearly 20 seconds later, Hill dropped Crute for a second time, landing a powerful check right hook right on Crute’s chin. Hill capitalized on the knockdown and landed a second vicious right hand that closed the show in under a minute.

Now it was time to break into the Top 10. 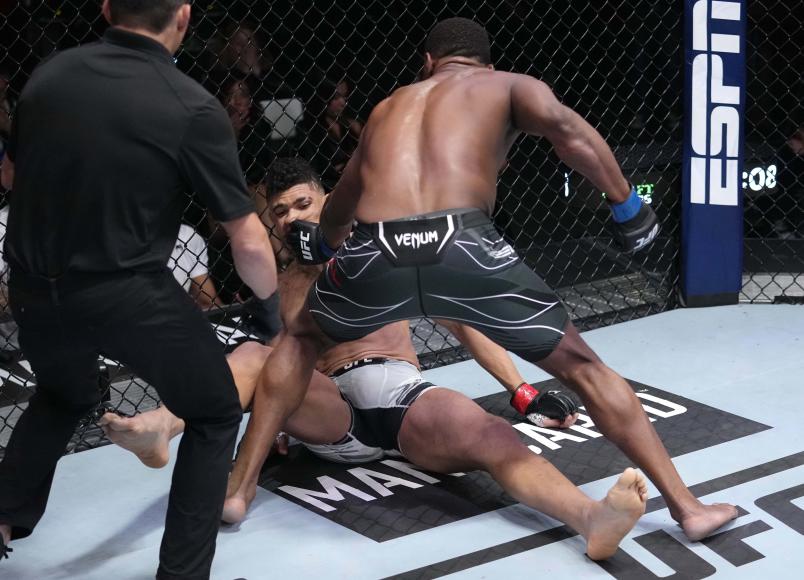 Proving his striking can finish well-rounded ranked opposition, his next test was to see if it was on the same caliber as knockout artist Johnny Walker. Ranked No. 10 heading into this bout, Walker had 15 knockouts in his 18 professional wins, including KO victories over Khalil Rountree Jr. and Ryan Spann.

Walker opened the bout with a lot of slick kicks, switching from low to high, nearly catching Hill flush on a few attempts. But that didn’t matter. Landing a right hook on Walker’s temple midway through the round, Hill shut the lights out, earning his second consecutive knockout victory.

Not only was the knockout itself impressive, but it was already Hill’s third win against a ranked opponent in his sixth UFC bout. At 10-1, 1 NC, Hill is ready to make a run at the light heavyweight division’s best. His next bout is scheduled for UFC Fight Night: Santos vs Hill on August 6, where Hill will take on former title challenger and No. 6 contender Thiago Santos at the UFC APEX.