Highlighting UFC’s Biggest Stars Who Made Their Initial Marks On Dana White’s Contender Series And Has Continued To Impress Throughout Their UFC Careers
By Kevin Schuster, On Twitter @KevinESchuster • Jul. 7, 2022

Dana White’s Contender Series has proven to be a steppingstone for rising MMA stars, giving up-and-comers the opportunity to showcase their skills in front of UFC President Dana White. Typically given one opportunity to prove themselves, fighters on DWCS can earn a UFC contract if their performance is on par with current UFC talent.

In this series, we showcase DWCS grads who have started to rise the ranks since earning their UFC contract on the show. 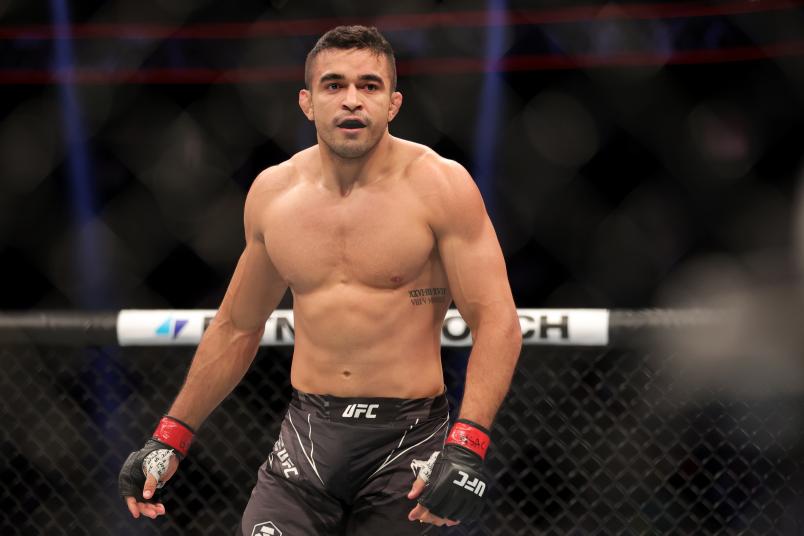 In 2018, Andre Muniz was invited to Dana White’s Contender Series Brazil, where he’d face Bruno Assis, a former training partner. Making his return to the middleweight division from light heavyweight, the build-up to the fight couldn’t have been more difficult for “Sergipano”.

Muniz’s visa arrived behind schedule, forcing a late arrival to Las Vegas only two days before weigh-ins. Muniz entered the Octagon with numerous injuries and was nearly medically unfit to compete. With the odds stacked up against him, Muniz fought through the pain and pounded out a unanimous decision victory.

But on DWCS, a win doesn’t always earn you a UFC contract.

Twelve months passed and Muniz was given an opportunity of a lifetime: a second chance to impress UFC President Dana White.

Muniz stepped in the cage against Taylor Johnson on the August 6, 2019 edition of DWCS. A successful collegiate wrestler, Johnson’s strength was said to be an equalizer to Muniz’s exceptional grappling ability. Unlike his first DWCS bout, Muniz got right to the chase. 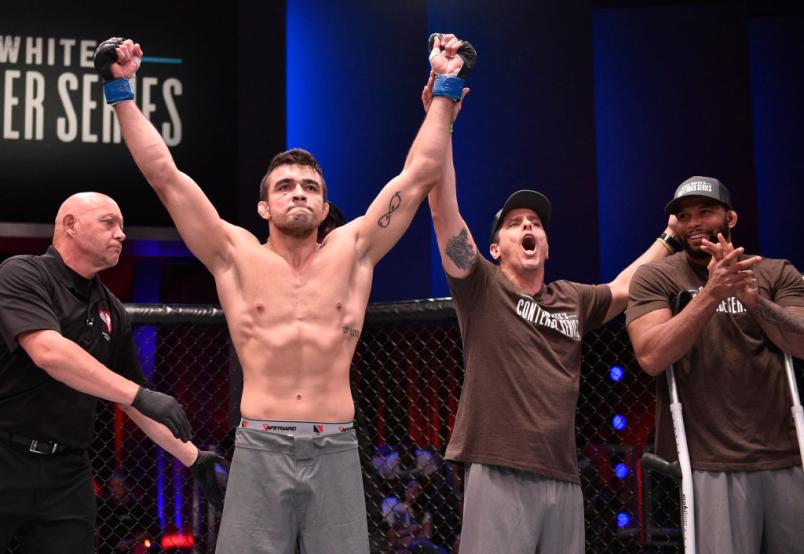 Andre Muniz celebrates after his submission victory over Taylor Johnson in their middleweight bout during week seven of Dana White's Contender Series on August 06, 2019 in Las Vegas, Nevada. (Photo by Chris Unger/Zuffa LLC)

Taken down nearly 15 seconds into the fight, Muniz reversed position and eventually jumped on Johnson’s back. Training Brazilian jiu-jitsu since he was 13, Muniz was too comfortable from that position and was able to sink in the choke and earn the first-round submission victory.

Dominating an opponent and finishing the fight in less than two minutes is what garners attention, and that’s what White saw in this performance. In his second attempt, Muniz finally earned a UFC contract.

In his debut at UFC Fight Night Błachowicz vs. Jacaré, Muniz fought Antônio Arroyo to a hard-fought decision victory. Each fighter recorded over five minutes of control time, but it was Muniz’s consistency on the feet that swayed the judges in his favor.

After getting his feet wet in his new promotion, Muniz found his footing and picked up three consecutive submission victories, all by armbar in under four minutes. Defeating Bartosz Fabiński, Ronaldo “Jacaré” Souza, then Eryk Anders, Muniz continued progressing, fighting more difficult opponents each time out.

Muniz’s victory against veteran standout Souza was his standout performance since arriving to the promotion. Breaking Souza’s arm to hand his opponent the first and only submission loss in his career, Muniz showed that his grappling was incomparable to even one of the most dangerous fighters UFC has ever seen.

And that’s what is so telling of Muniz’s success and how he’s become one of the most prolific fighters to come from DWCS. As the difficulty of opposition increases, being given dominant strikers, wrestlers or long-time veterans, “Sergipano” continues to improve in all facets of martial arts and dominate every opponent put in front of him. 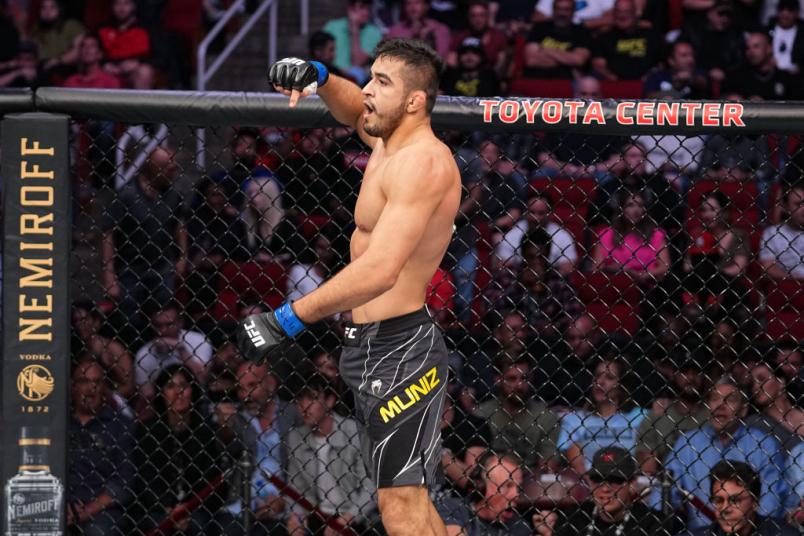 Andre Muniz reacts after defeating Ronaldo Souza of Brazil in their middleweight bout during the UFC 262 event at Toyota Center on May 15, 2021 in Houston, Texas. (Photo by Josh Hedges/Zuffa LLC)

Racking up early submission victories time and again earns you a spot in the Top 15. Going into his most recent bout, Muniz was given an opportunity to fight Top 10 opponent Uriah Hall, whose recent run of success made him Muniz’s most difficult test to date.

Capping off the early prelims at UFC 276: Adesanya vs Cannonier, Muniz dominated Hall for 15 minutes, proving that his grappling can control top contenders in the middleweight division. Muniz recorded over 10 minutes of control time while out striking Hall 99-24 and limiting “Prime Time” to zero significant strikes in the first and third rounds.

Five fights and five wins into his UFC career, the middleweight division’s No. 10 contender wants a Top 5 opponent next, calling out Derek Brunson after his most recent performance.

“[Brunson], choose the date,” Muniz said. “The day, the month, but it has to be this year. I want you. The next step is you. I want the small group now, the Top 5. I will be world champion.”