Brendan Allen: “I Just Want To Be Me”

Brendan Allen Wants To Show His True Potential With A Dominant Performance Over Krzysztof Jotko At UFC Fight Night: Dern vs Yan
By Maddyn Johnstone-Thomas, on Twitter @MaddynThomas • Sep. 29, 2022

Brendan Allen made his Octagon debut on October 18, 2019, securing a second-round submission over Kevin Holland.

Since his first UFC victory, Allen has compiled a record of 6-2, and despite the success the 26-year-old achieved, he feels that he is a late bloomer and hasn’t shown his true potential yet. Through the ups and downs, Allen has learned a lot about himself and what he brings to the fight game.

“I need to go out there and be just me,” Allen told UFC.com ahead of his bout at UFC Fight Night: Dern vs Yan. “Me is good enough, more than good enough, and so I just need to be me. I know that I can be the best in the world, and I am the best in the world when I’m on. When I’m on, I’m on, and there’s no man that can beat me. That’s what I strive to achieve every time, especially now that I’m willing to go through any avenue that I have to go through in order to achieve that.”

Allen is heading into his middleweight bout with Krzysztof Jotko feeling mentally prepared, something that he hasn’t felt before in previous fights. He believes it’ll make all the difference when he steps into the Octagon on Saturday night. 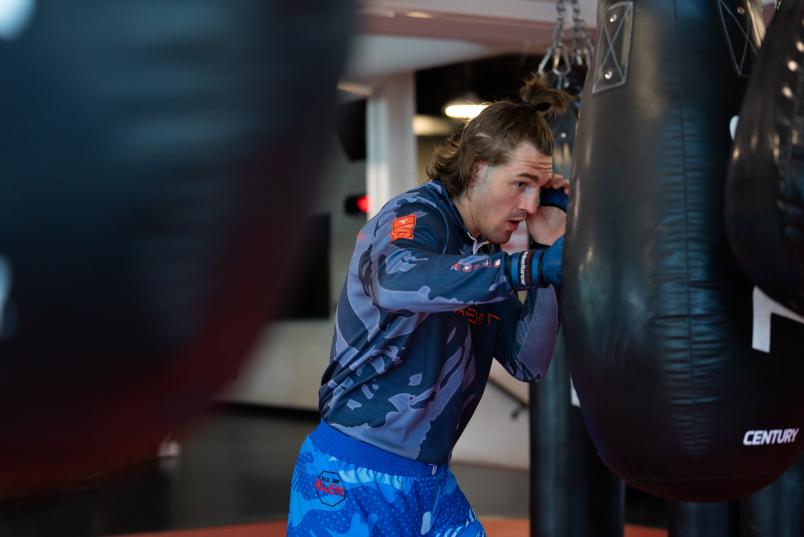 “I think I’ve done a lot of mental preparation for this fight, and I feel the best mentally that I ever have,” Allen said. “I had a lot of anxiety and stuff before the last fight and that hasn’t happened to me in a long time and I don’t really know why, but I’ve learned tools on how to deal with that better and I just feel confident in myself and my abilities. I just want to go out there and fight like I train.”

“All In” comes into this matchup riding a two-fight win streak, with wins over Sam Alvey and Jacob Malkoun. During his last fight at UFC 275 in Singapore, Allen emphasized how much he was enjoying the fight week process due to the people he was surrounding himself with. That same energy is being translated into this fight week as he has spent time with UFC lightweight Michael Johnson and friend Tuco Tokkos.

Being able to surround himself with these people, in addition to having a full camp, has Allen feeling fully confident heading into this matchup.

“It’s nice to finish the year off with a full camp; no matter what happens in the outcome, at least it was a full camp,” Allen said. “It is what it is, I don’t have any excuses, the better man will hopefully win Saturday night. I’m not attached to the outcome; I’m trying not to be at least. I just want to be me.”

His opponent, Jotko, is also riding a two-fight win streak, with wins over Misha Cirkunov and Gerald Meerschaert. Jotko has been in the UFC since 2013 and has a record of 24-5, with six wins by knockout and one by submission. Allen views Jotko, who has only been knocked out twice and submitted once in his career, as the perfect test because of the Poland native’s ability to be good everywhere.

“He’s been in the UFC for a long time, had a lot of fights, and he’s been successful,” Allen said. “I’m excited to see if I can solve that puzzle better than anyone else has.

“No one has been able to go out there and beat him everywhere. I know Strickland beat him very soundly on the feet, easily, so I’d like to do that everywhere, but, to be honest, I don’t care, as long as I win. That’s all that matters.”

A win over Jotko could put Allen one step closer to making it into the middleweight rankings, but that isn’t what he expects out of this fight.

The plan for Allen to come out a victory on Saturday is simple: just be himself. That’s his main priority and, after that, everything else will fall into place.