Heading Into What Could Possibly Be His Final DWCS Fight, Bo Nickal Is Confident He’s About To Set The DWCS Viewership Record.

With the way things are trending, tonight’s Dana White’s Contender Series Season 6 Season Finale has a good shot at being the most viewed episode in DWCS history.

The brainchild of the UFC President has delivered numerous well-known fighters and unforgettable moments, and with White’s love for the show, there’s no doubt the excitement is far from over.

“Obviously, the main guy that comes to mind for Contender Series would be Sean O’Malley,” tonight’s headliner Bo Nickal said. “He had a great performance on Contender Series and now he’s one of the biggest draws in the UFC, so that was definitely an exciting kick off to his UFC career. Jamahal Hill, he’s fighting some top ranked guys at 205. There’s definitely a lot of tough guys and impressive guys, and as the Contender Series continues it’s going to continue to get tougher and tougher.” 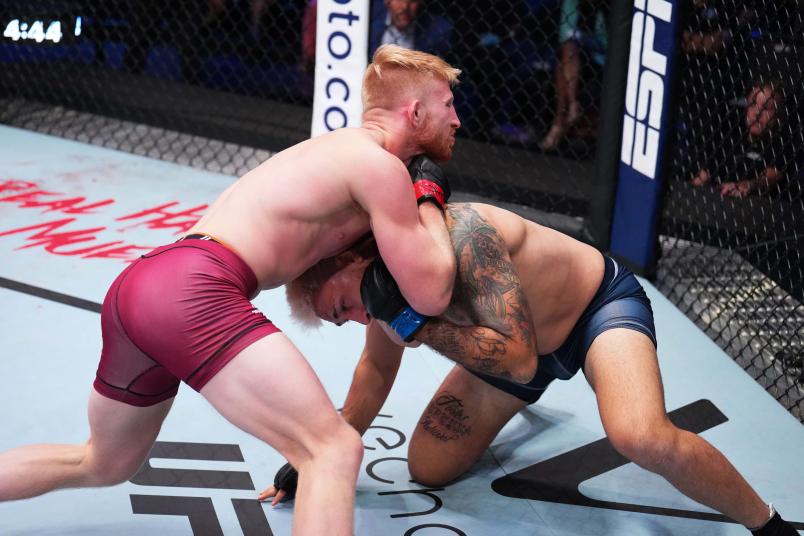 Nickal had the MMA and NCAA world in his palm on week three of season six with what appeared to be an effortless victory over Zachary Borrego. It’s very obvious to the masses that even before he walked to the cage, Nickal was going to be an enormous name in the sport in one way or the other. His star power as an untested fighter can only be matched by UFC 203’s featured bout with welterweight CM Punk.

One minute and three seconds later, it was clear that Nickal was going to have a much different run. The A-side to the one-minute fight just might be the biggest name in DWCS history.

All that glitters isn’t gold, however. While Nickal very well could be the biggest star DWCS has ever seen, it’s come at a cost. Despite not landing the coveted UFC contract, his name has come up quite a bit amongst active and newly retired UFC stars, and they’re not using their airtime to praise the Hodge Trophy winner.

Luke Rockhold, Anthony Smith and others are quick to remind everybody Nickal may be the shiny toy right now, but he’s no contender yet.

“It’s kind of funny to me to hear these guys talking about me,” Nickal said. “It would be kind of like me talking some crap to the media about some freshman in college who’s 2-0 and has won two matches. I would never put myself in that position the way they are but, at the same time, people just want to stay relevant and I’m the big news right now and I’m the one everybody’s wanting to talk about, so I think these guys want to attach to me however they can to stay relevant and stay involved.”

With the newfound animosity towards the trending middleweight, Nickal is scheduled to main event the season six finale of DWCS with even more hype than he had in early August.

Nickal has no doubt that his main event bout with CFFC champion Donovan Beard will have even more eyeballs on it, but it won’t be a record that lasts long. With full transparency, Nickal is actually rooting for it to be topped.

“I actually don’t want people going forward to necessarily do worse,” Nickal said. “I want the people after me to do better and bigger things, and amazing things, so hopefully I have some teammates that come after me that do even better. If I can predict it, I think it’ll be the biggest thing to that point, but hopefully other people can come in and do even bigger and better.”

For all the greatest action in combat sports sign up TODAY for UFC FIGHT PASS!